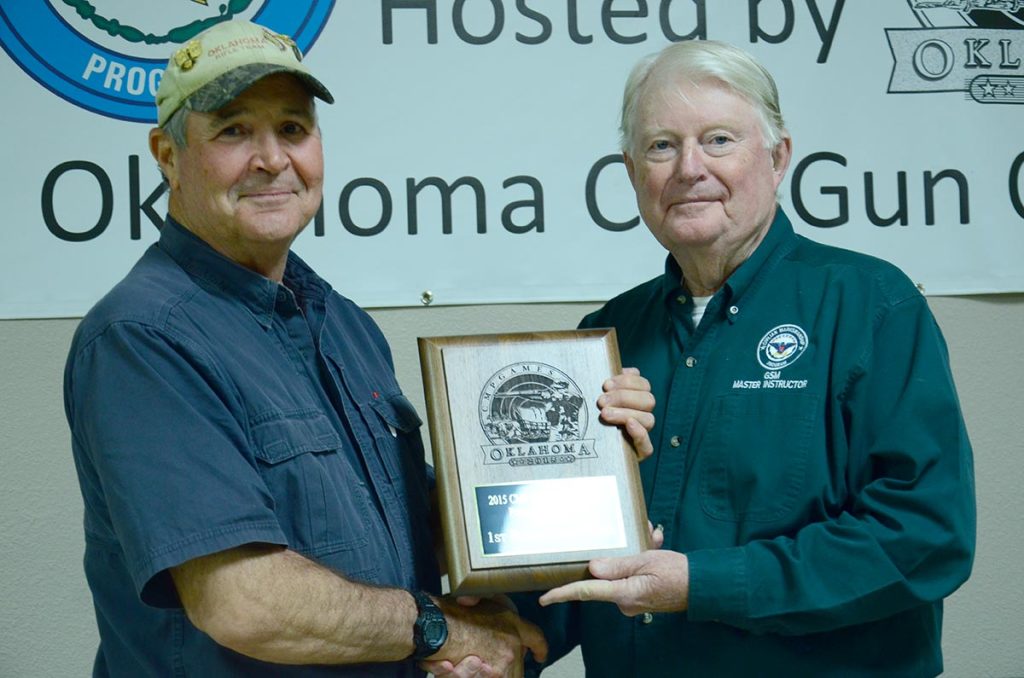 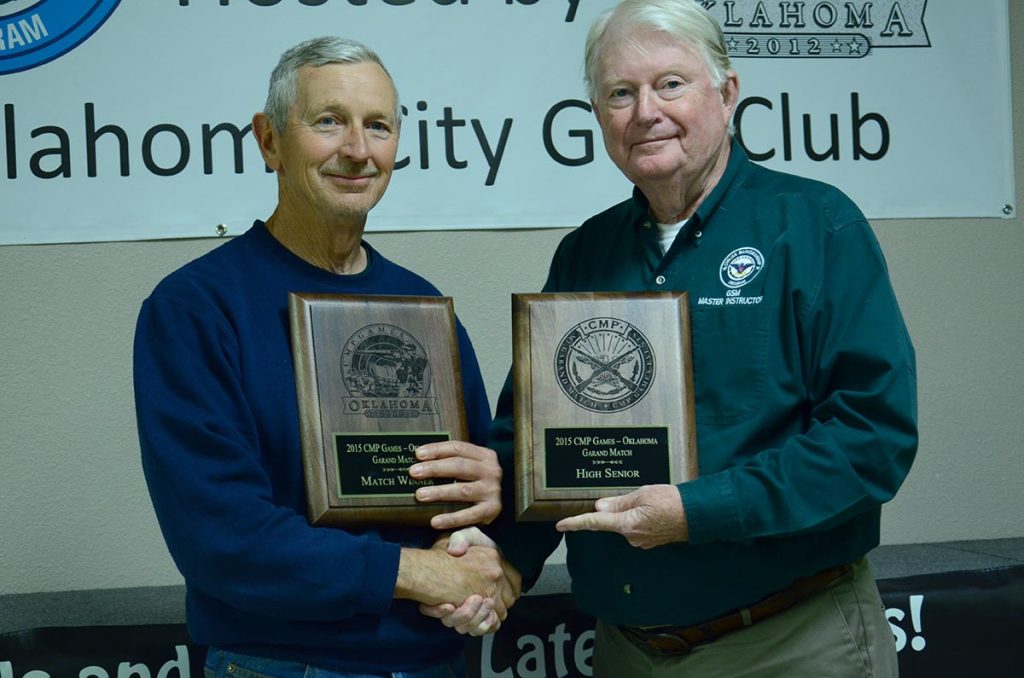 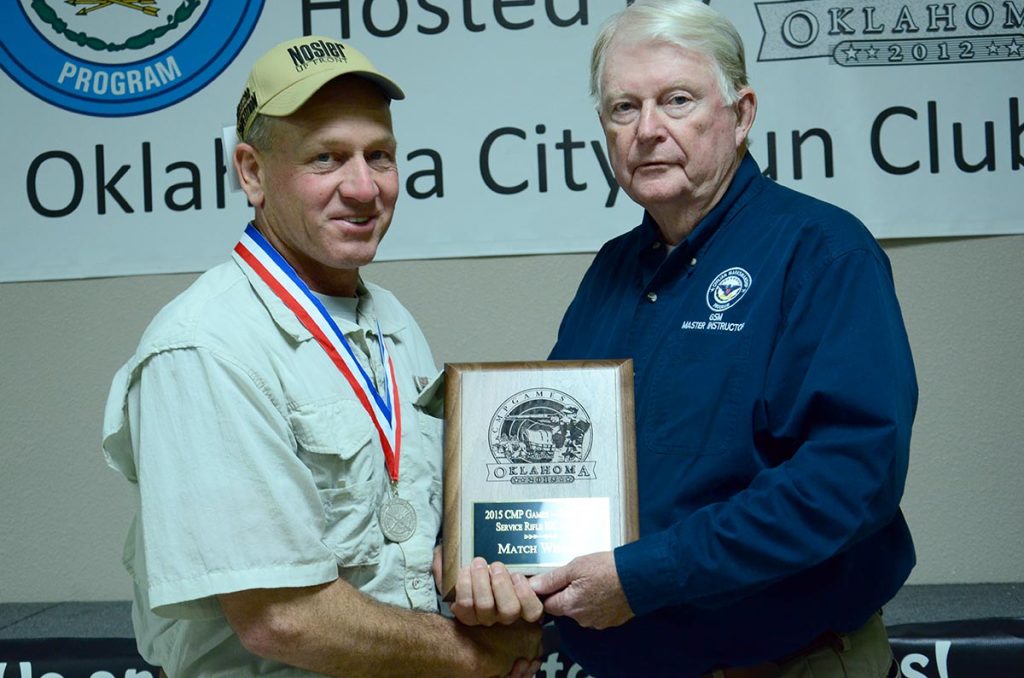 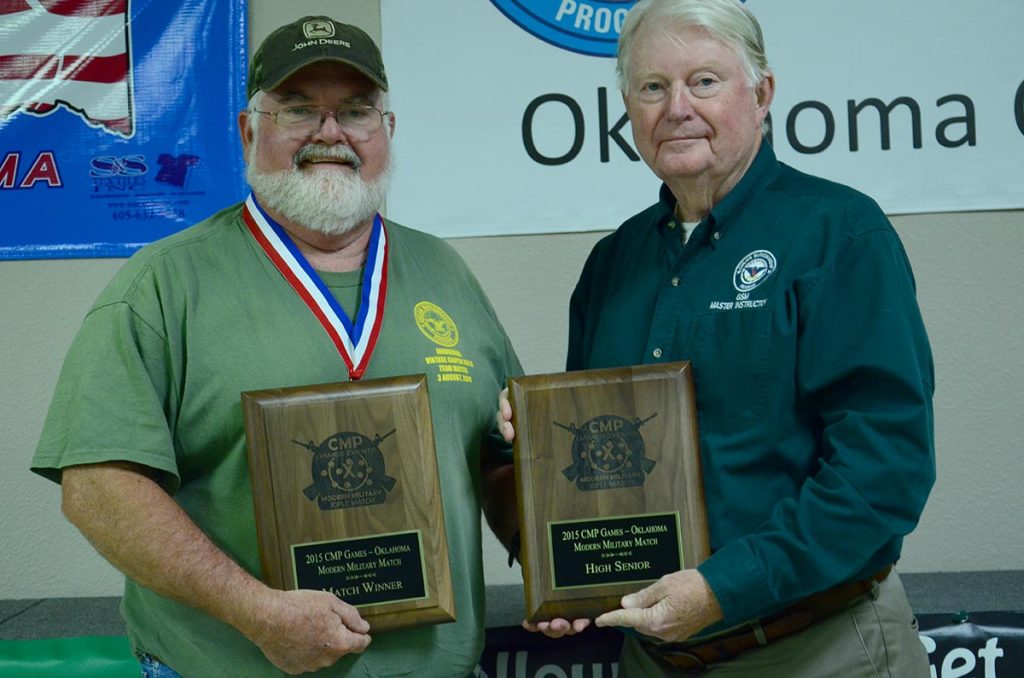 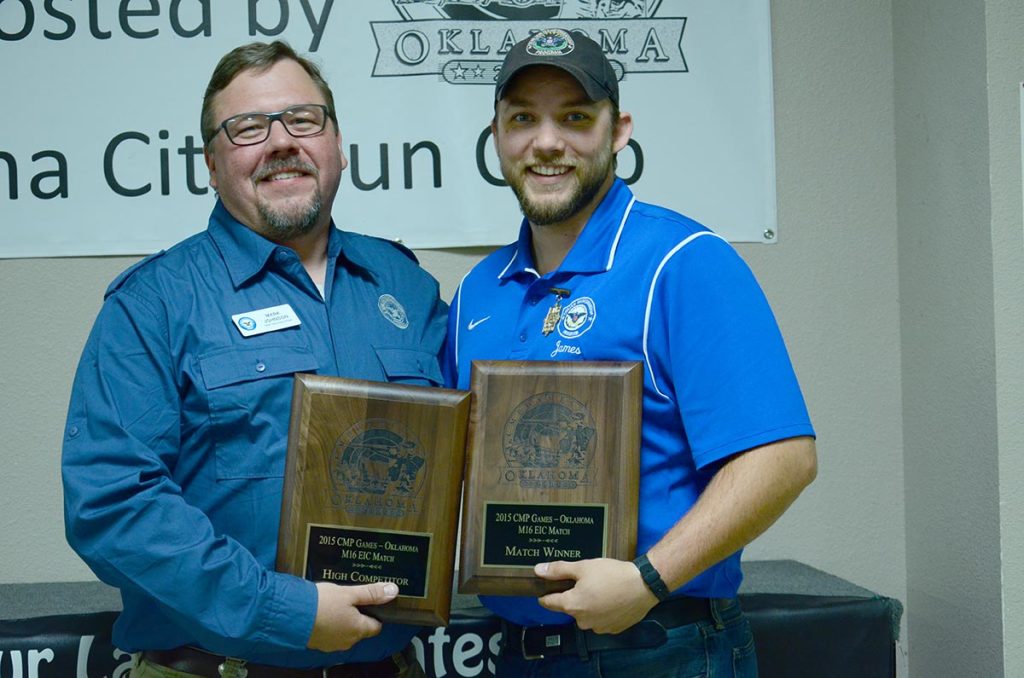 The top 10 percent of all competitors in the match with no EIC points were eligible to earn their four introductory points. The CMP SAFS EIC Match is the only event where four intro points may be earned. Tritschler earned her first points in the match as did Darell Brewer III, 17, of Rose Hill, KS, who placed fourth in the match (370-6x), and was high junior. Harry Epperson, 65, of Oklahoma City, OK, was the high senior (363-6x). 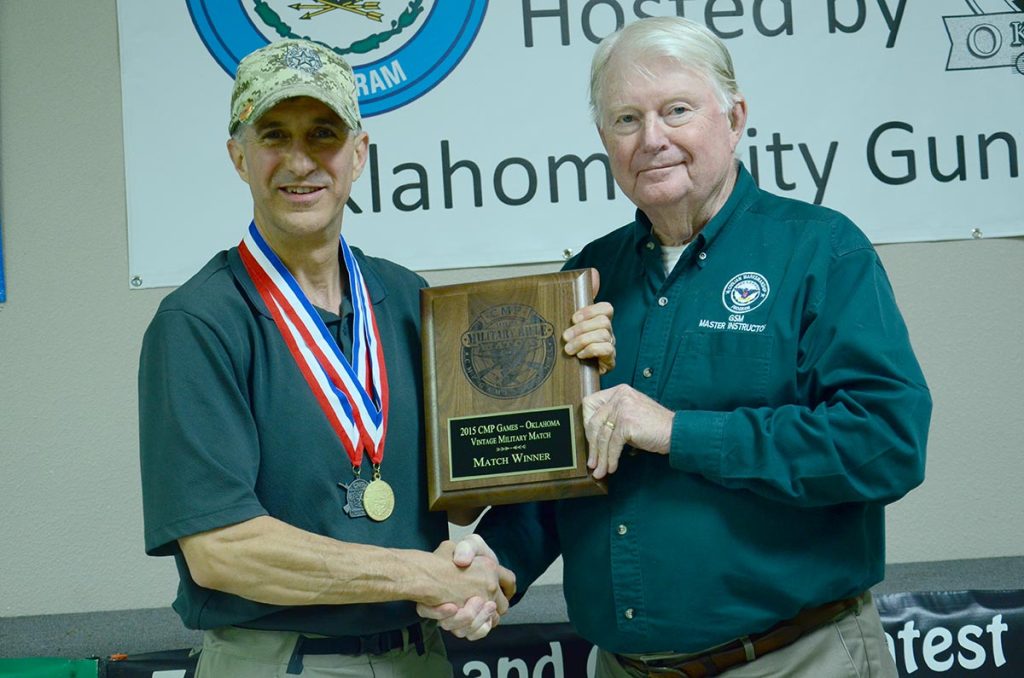 Kent Stonecipher placed second (480-10x) in a tiebreaker with Shomber and Jeffrey Lin, 49, of Ft. Worth, TX, placed third (478-12).  Shomber, Stonecipher and Lin each had earned their Distinguished Badges prior to the match. 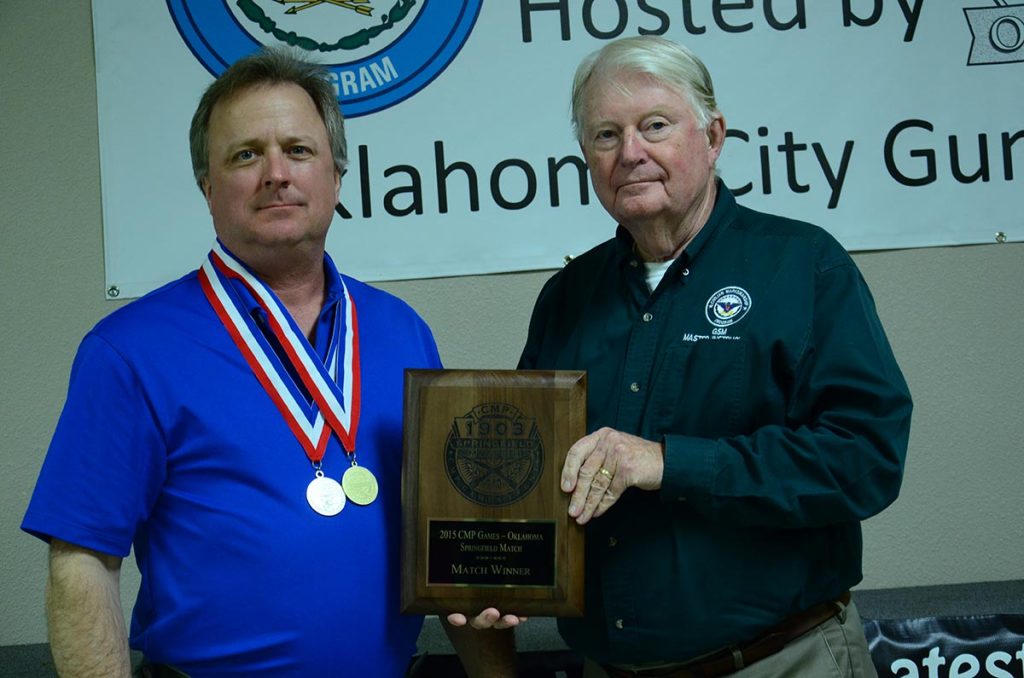 In the Vintage Sniper Rifle Team Match, the combo of William Fairless and Bob Thomas, 56, of Del City, OK, captured first place in the bolt action class with a team aggregate score of 385-5x, firing under the team name “Billy Bob.”  Fairless fired 300 and 600 yard scores of 99-2x and 94, respectively, for an individual total of 193-2x. Thomas posted scores of 97-1x and 95-2x for a 192-3x total.  A total of 24 teams competed in the manually-operated bolt class. 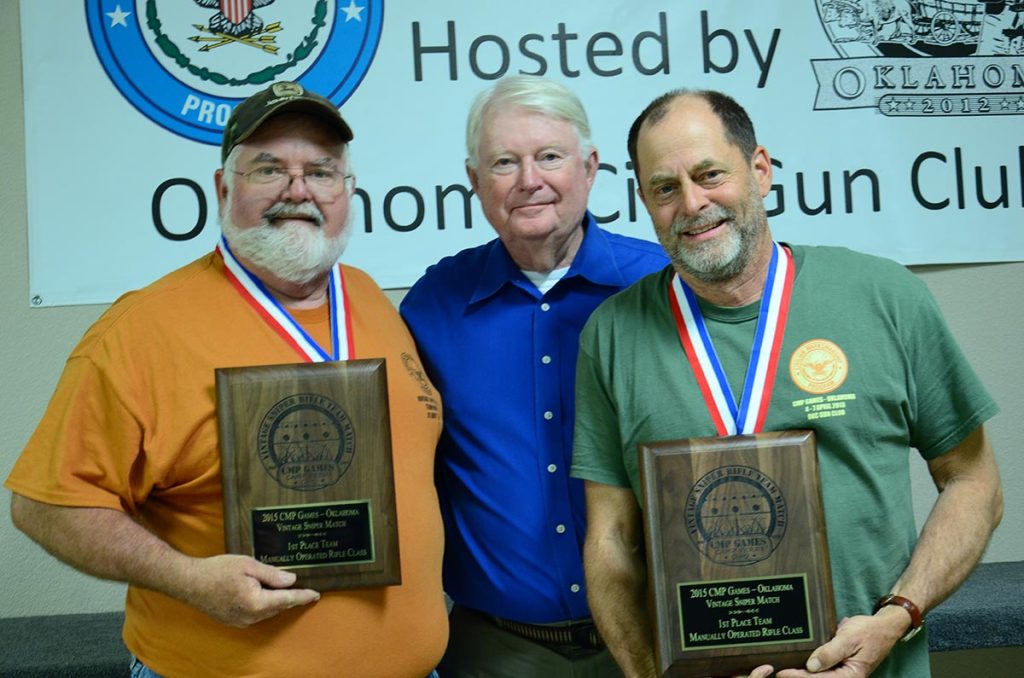 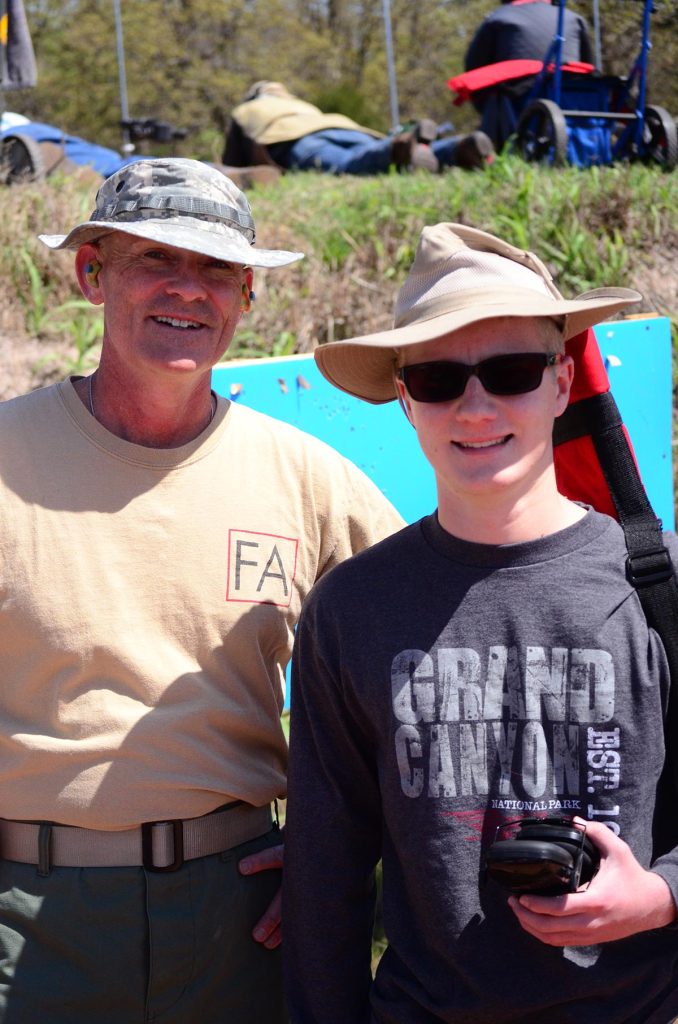 Paul Schmitz, 40, of Battlefield, MO, won the As-Issue M1 Carbine Match with an aggregate score of 358-1x out of 400 points possible. The match features prone, prone rapid, sitting rapid and standing stages and Schmitz fired 86, 91, 86 and 95 in those stages, respectively.

Lee McKinney, 68, of Rio Rico, AZ, placed second in the carbine match, losing a tiebreaker to Schmitz with the only center shot fired by either shooter (358-0x). Schmitz’ solo x-ring 10 came in the offhand stage.  Harold Pate placed third with a 356-2x.

A total of 42 competitors fired in the As-Issued M1 Carbine Match.  McKinney was the high senior in the match and the high junior was Patrick Arnold (312). 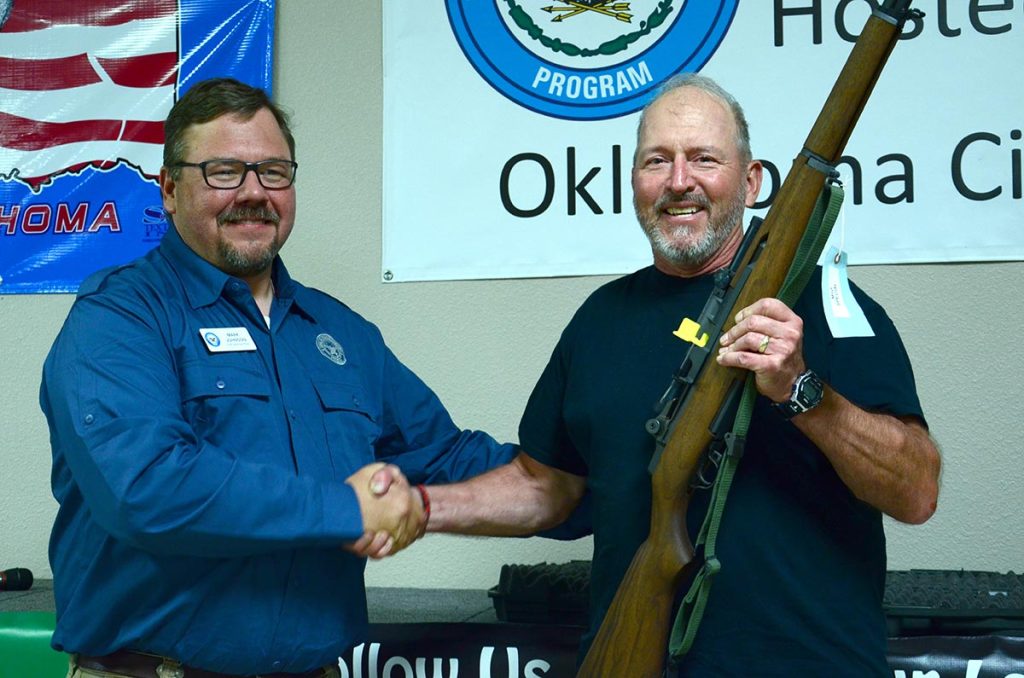 A big surprise during the awards ceremony was an announcement by Chief Operating Officer, Mark Johnson. A raffle prize M1D rifle with scope and mount was given away to one lucky attendee that was present at the awards ceremony. The first name called wasn’t present, so the rifle went to the second name called, David Nichols.