The 6th Annual Dixie Double Air Rifle and Pistol Competition will be fired November 21-23 at the world-class CMP South Range in Anniston, Ala. The match is open to both men and women, as well as junior competitors. With regular participation from the Army Marksmanship Unit, the Dixie Double is an opportunity to stand on the firing line amongst some of the best marksmen in the country. 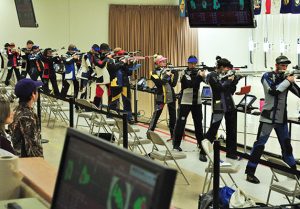 The match is a two-day event, where competitors compare 60-shot standing scores. A two-man aggregate team event is also held concurrently with the open shooting competition. During the event, a final is held each day to determine daily winners, while an award ceremony on the last day of competition recognizes the combined, two-day, overall score leaders. The team award is also presented to the two-man teams with the highest aggregate scores.

A new, fun addition to the match this year is the Target Sprint competition, to be held November 22. The Target Sprint is open to all competitors and non-competitors, ages 10 and up, who have completed a basic rifle safety class. During the competition, participants run along a path, occasionally stopping to fire air rifles at five 10-meter falling targets – knocking all over before continuing on. The first to cross the finish line wins!

The 20,000 sq. ft. South Range is located within the CMP Anniston Competition Center and consists of 80, 10-meter firing points. Each is equipped with state-of-the-art MEGAlink electronic targets, which allow instant shot displays to both competitors and spectators.