Thanks to the generosity of past marksmen, the Civilian Marksmanship Program (CMP) has added a new pistol trophy to the National Matches that will recognize the High Army New Shooter during the President’s-National Trophy Individual Aggregate – comprised of competitor scores combined from two of the most prestigious competitions conducted at the annual event. 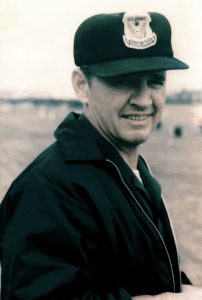 Aubrey Smith enlisted in the Army on December 5, 1945, at age 15. He served in the Korean War from 1951-1952 and was assigned to the 1st Armored Division in Fort Hood, Texas, where he began competitive pistol shooting with 4th MED Tank Bn in 1954. That same year, he competed in the All Army Pistol Matches and eventually traveled to the National Matches as a member of the All Army Team. He continued his streak of competing at Camp Perry annually until 1974.

When the U.S. Army Marksmanship Unit was activated, MSG Smith was assigned to the unit in September 1957 – one of the first groups of pistol shooters to be assigned to the unit. He began International Pistol Shooting in 1958 and was selected for the U.S. Team for the World Championships held in Moscow.

Other assignments and achievements include:

The annual event, held at the Camp Perry National Guard Training Base since 1907, is a four-week long mix of original CMP matches along with traditional pistol, smallbore, highpower rifle and long range rifle competitions and clinics. Off the firing line, Commercial Row features dozens of vendors suited to an assortment of marksmanship material needs.