Dry firing was a valuable training method before ammunition prices became ridiculous. Now, dry firing has the economic benefit of not consuming expensive ammunition and barrel life and can be done at home.

For safety, always be absolutely sure that there is no ammunition present, and train safely. Have a hard backstop capable of stopping a shot in any case, and keep the downrange area clear of anything that can be injured or damaged if you screw up. Basements may be preferable to upstairs.

If you are not training at these standard distances, or at a standard reduced distance where printed targets are commercially available, you will have to scale the targets to get realistic dry fire training. If you train in smallbore for high power or vice versa, and on the official targets, the six-minute vs. eight-minute bull issue will affect sight aperture sizing and aiming.

To scale targets, use similar triangles. Two similar triangles will have the same angles, and side lengths will be in proportion. The NRA high power SR target has a 13-in wide bull (9-ring) at 200-yds (600 ft.). Let’s say that your dry fire practice area has 15-ft from you to the target.

To find “x,” the practice bull size, we note that the tangent of the angle θ is the opposite side divided by the adjacent side, or:

To solve for the target frame size, use the same method. Assuming a 4-ft. wide and 6-ft. tall target frame at 200 yds.

You can use Microsoft Word’s drawing features to add and scale a “tan colored” rectangle with a black colored circle centered inside. In this case we would have a tan rectangle 1.2-in. wide, 1.8-in. tall, and with a 0.325-in. diameter black circle inside. If you can’t get these sizes exactly, round off. Don’t worry about trying to replicate the scoring rings inside or outside of the aiming bull or a shot spotter. Do you see them when you’re aiming at the real target? If so, you are not focusing on your front sight.

Olympian Erich Buljong recommended using pictures of the range you are planning to compete at in order to better “visualize” this in your training. If you have a picture of the targets from Camp Perry as seen from the firing line, copy it into a computer program like Microsoft Word. Then crop and resize the picture so that the target frame areas appear to be the appropriately scaled size for the distance that you will be training at.

The pictures of the targets will likely be blurry. I find it easiest to both scale the picture and make the targets sharper by covering them with a tan rectangle with a black circle inside. Do this using Word’s “Insert shapes” feature. You can edit the inserted shapes to get them to the correctly scaled size.

Insert a black circle. Right click and go into layout options and the tab that lets you set the sizes to the nearest 0.01 in. Type in the size you want. Also set the color to black and set the outline to “no outline.” The outline will make the circle look bigger. Then resize the picture by dragging it by its corner until the aiming bulls on the targets appear to be the same size or slightly smaller than your black circle.

Now insert a tan rectangle to cover the rest of the target. The newer versions of Word may not show tan as an explicit choice. If you go into the “more fill colors” pop up menu, the shade of tan shown is Red 210, Green 180, and Blue 140. Use this for fill, and again, no outline. Go into its menu as you did with the black circle, and set its size by entering the dimensions.

Center the black circle inside the tan rectangle. You may have to “bring the circle to the front” using the “order” function in the drawing tools. “Group” the black circle and tan box, then copy and paste it over each target that you see. Now you have both sharp aiming targets, and a background that “looks” just like Camp Perry. The menus and process may vary with different versions of Word or with other document programs.

You also have the number boards in the picture. One concern at a match is getting on your own target and not cross firing. You may want to “edit” the number boards by inserting a black or white “text box” over them, and perhaps using opposite colored letters rather than numbers. The “text box” is also in the “insert shapes” menu. You can use the menu to change the colors of the letters and background fill.

If you spend all year training with a picture of target number 19, and unfortunately get squadded on target number 17, you may find yourself cross firing onto number 19 when you “get into the zone.” If you used letters on the number boards while you trained, your subconscious is less likely to confuse the letters that you trained with, with a particular number on the real target board.

Vary your practice so that you dry fire on targets with both black and white number boards. With pictures of the targets, only a couple target frames will have the number boards directly in-line with them. The rest will appear to be off to one side or the other because the number boards are at a different distance. Thus, you will at best have only two or three targets in a picture with an aligned number board. These are the only ones in the picture that you should train on. In addition to training your shot plan, and visualizing the actual range, you are also training for getting on and staying on your own target.

I hang cut-out manila folders on the wall at appropriate heights (offhand, sitting, prone, and kneeling) and slide these target pictures in and out for the ranges I’m training for. I play with the lamps that I use to train for varying light conditions.

If you don’t have your own pictures of a range of interest, you may be able to find some on the internet. A photographer has an implied copyright to his pictures, even if he posts them on the internet. You may only have a defense of “fair use” to use them but it may be easier to get permission.

In Figure 2, a picture of the line at Camp Perry provided by the CMP shows targets 18-27 and number boards 18-26. Apparently the photographer was in line with targets 18 & 19, as their number boards line up the closest.

In Figure 3, this picture was arbitrarily cropped and scaled for a training distance equivalent to 200 yds., leaving only five targets showing. You will have to calculate the sizes for your dry fire training range.

The blurry targets pictured were covered with a sharp tan rectangle and a black circle of the appropriate scaled size. In this example we don’t have off-center number boards on the leftmost targets. For training purposes, you can just re-center the newly made letter boards, or find another picture where the middle targets appear in line with their number boards. The number boards were also changed to letters to avoid “programming yourself” for a particular target number.

Training is not just the shooting part, and you don’t need to get to a range and put rounds down range to get in good training. You can set up a dry fire range like this and use it as little as 5-20 minutes a day, and you should see improvement. I would dry fire train for 10 minutes in the morning and 20 minutes at night, and get to the range when I could. I would even use these training target pictures to practice setting up and tearing down my gear on the line, mainly for aligning my position (NPA) and setting up the spotting scope. 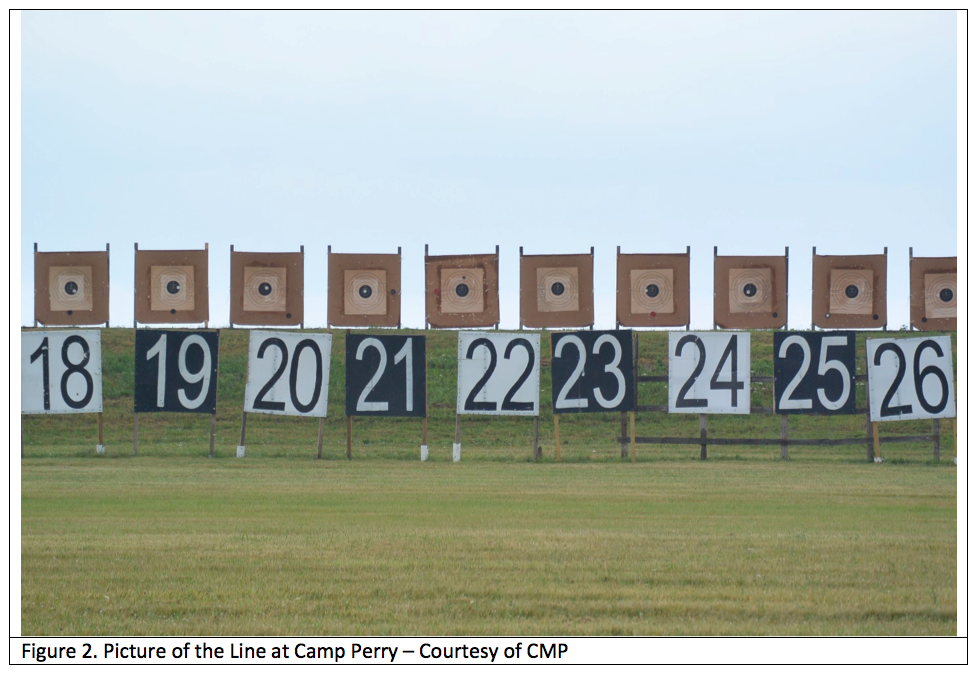 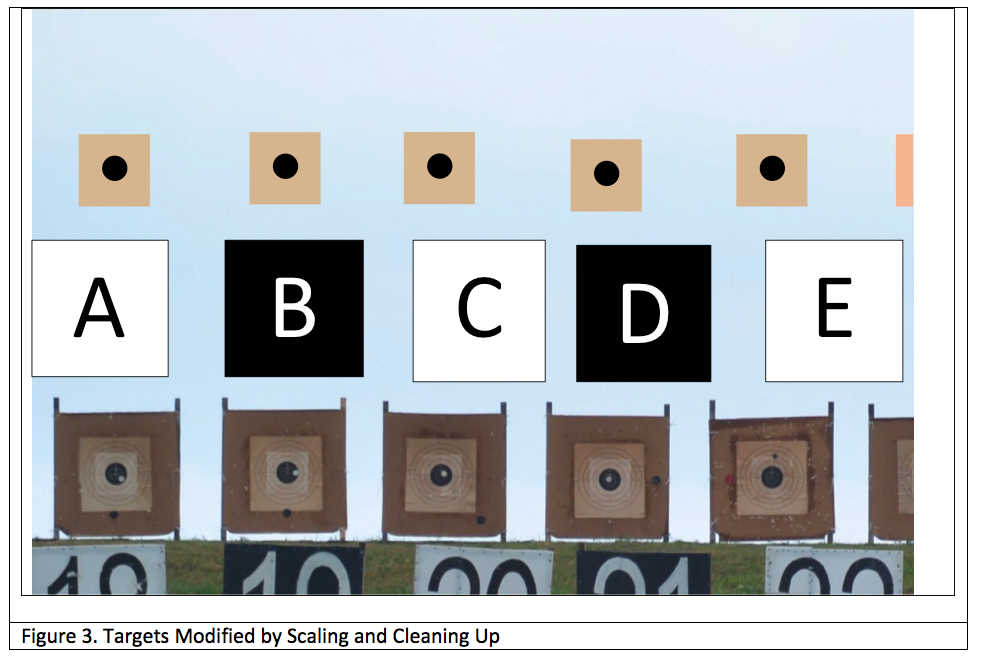