CAMP PERRY, Ohio – Those looking for an opportunity to compete in a fun and challenging rifle event should strongly consider registering for the M1 Carbine Match, to be fired on July 21, 2014. The match will be part of the popular Civilian Marksmanship Program (CMP) Games Events during the National Trophy Rifle Matches at Camp Perry and is a valuable test of a shooter’s accuracy and endurance. 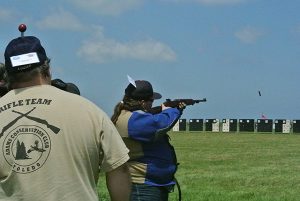 The M1 Carbine is a lightweight, semi-automatic rifle that was used as a standard firearm for the U.S. Military during World War II, the Korean War and the Vietnam War. It was also used by foreign military and paramilitary forces, while also becoming a popular civilian firearm.

A clinic for the M1 Carbine will be held on Saturday, July 19, from 4-6 p.m. at the CMP Result Center, located by the Petraca Range bleachers. The clinic is conducted by qualified members of the CMP and is offered to any competitors firing in the Carbine match.