Come Join the Fun During the Monthly Pneumatic Bench League

CAMP PERRY, OH – A new and enticing match for all ages, the CMP Monthly Pneumatic Air Rifle Bench League provides the excitement of a long-distance match from the comfort of a climate-controlled indoor air rifle range.

Competitors fire from a bench rest while seated towards our state-of-the-art electronic targets. Marksmen may choose to fire with aperture receiver sights or a scope with a Weaver base.

Competitors may use their own rifles or borrow rifles that are available for use at the range. All shooters must use a sporter, single-pump, pneumatic air rifle chambered in .177 caliber with a velocity of 600 FPS or less. Entry fee for the match is $2, with 100 percent payout each month to the first, second and third place finishers. 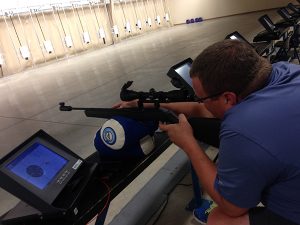 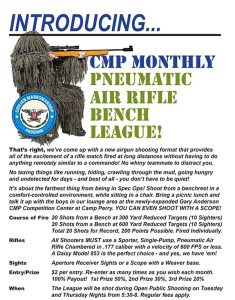 Those interested in firing in the Monthly Pneumatic Air Rifle Bench League can join us for Open Public Shooting, every Tuesday and Thursday from 5-8 p.m. at the Gary Anderson Competition Center at Camp Perry. Open Public Shooting fees are $5 for adults and $2 for juniors.

The Gary Anderson Competition Center is the completed result of the $1.1 million-dollar expansion to the formerly known CMP North Marksmanship Center. The expansion includes an open reception and common area, fully equipped classrooms, cylinder filling room and CMP retail store. The addition also includes projection screens and flat-screen television sets throughout the building, as well as authentic Olympic memorabilia and other remarkable items from the career of Gary Anderson.