Now overseen entirely by the CMP, the six-day CMP National Matches Junior Camp, Smallbore & Air Rifle, is open to three-position smallbore and standing/international precision air rifle juniors between the ages of 12 and 20. The camp will take place 17-22 July at Camp Perry, in Port Clinton, Ohio. Athletes must be currently involved in competitive smallbore and air rifle settings in order to participate.

A trained staff of 17 certified coaches, eight safety officers and four support staff will be on hand during the camp to ensure safety and provide guidance to junior competitors as they are reinforced with the fundamentals and positioning standards of each discipline. A 50- and 100-yard prone “Dewar Match” will be held on the electronic targets of Petrarca Range, along with a 60 Shot International Air Rifle match in the electronic air range found within the Gary Anderson CMP Competition Center, located next to Petrarca on Camp Perry’s grounds.

Campers will need to provide his or her own three-position smallbore target rifle, equipment and ammunition. Sporter air rifles are available for use during the air range portion of the camp.

About the Gary Anderson Competition Center: 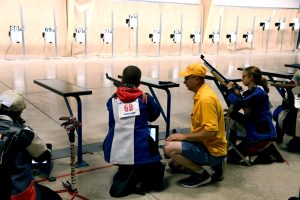 The Gary Anderson CMP Competition Center is a marksmanship sporting facility that includes an open reception and common area, fully equipped classrooms, cylinder filling room and CMP retail store. Large projection screens and flat-screen television sets throughout the building, as well as authentic Olympic memorabilia and other remarkable items from the career of decorated American marksman, Gary Anderson, can also be found within the building. An 80-point airgun range is attached to the main area and includes KTS electronic targets, available for purchase from the CMP.

About CMP Targets at Petrarca Range:

Petrarca Range is located at Camp Perry, next to the Gary Anderson CMP Competition Center. The range contains CMP Targets, powered by KTS, which work through the power of acoustics – “hearing” the shot and accurately determining its location. The CMP is proud to share these targets that are certain to be known as the way of the future.