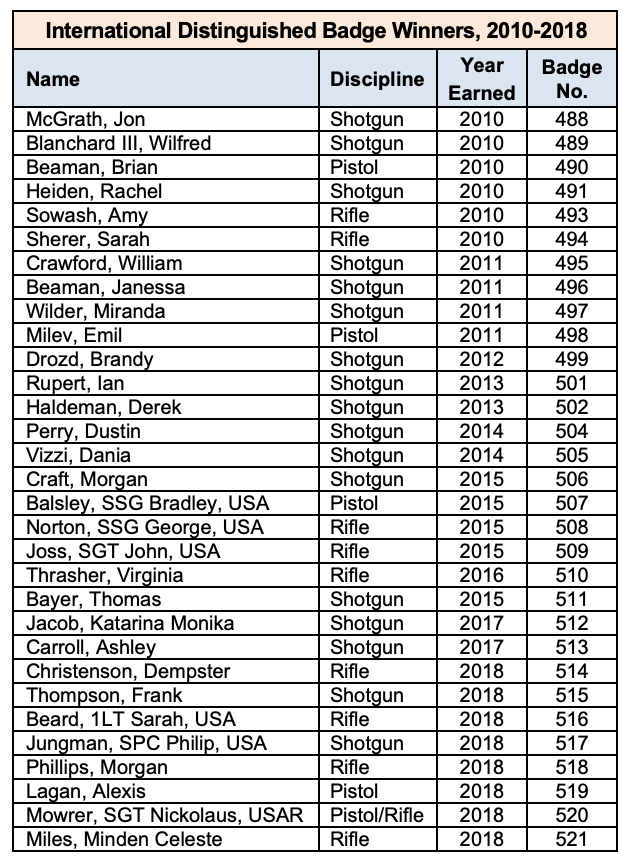 The completion of this new database has now enabled the CMP to identify athletes who earned U. S. Distinguished International Shooters Badges between 2010 and 2018 that were not previously awarded. The list published here identifies all athletes who reached the 30-point threshold during this period, including those who have already received their badges. Their names are listed with their shooting disciplines, years when they earned their badges and badge serial numbers.

The International Distinguished Badge was inaugurated in 1963 at the height of the cold war when shooters from the Soviet Union (USSR) were dominating Olympic and World Championship competitions. The purpose of this badge was to encourage more U. S. citizens to dedicate themselves to doing the intensive high-performance training necessary to win medals in international competitions. An Executive Order signed by President Dwight D. Eisenhower had already established the U. S. Army Marksmanship Unit in 1956 and had given it a mission of winning international competitions.  To further U. S. efforts to excel in Olympic and World Championship competitions, the National Board for the Promotion of Rifle Practice (NBPRP), which operated as a Department of Defense organization, recommended the creation of the International Distinguished Badge. That recommendation was approved in 1962 and in April 1963, President John F. Kennedy presented the first International Distinguished Badge to Gary Anderson, after he won four World Championship gold medals in the 1962 World Championship. Anderson later became the CMP Director of Civilian Marksmanship and is now the CMP’s Director of Civilian Marksmanship Emeritus.

The original criteria for receiving the badge was to win a gold, silver or bronze medal in an Olympic, World Championship or Pan American Games individual or team event. The first 28 badges were awarded in 1963 to athletes who won individual or team medals in the 1962 World Championship. That Championship marked an important milestone in U. S. marksmanship history because NBPRP and U. S. Armed Forces support was instrumental in sending a full, well-prepared USA team to Cairo to challenge the then dominant USSR team. After those initial badges were awarded, badge recognition was made retroactive to USA shooters who won medals in earlier international competitions.  The oldest badges date back to the 1920 Olympic Games. With the advent of the Championship of the Americas in 1973 and ISSF World Cups in 1986, award criteria for the International Distinguished Badge were modified to establish the current 30-point requirement that awards different point values for medals won in championships governed by the International Shooting Sports Federation (ISSF).

Current badge criteria also award extra credit points for establishing a new World Record (20 points or 10 points for junior records), equaling a World Record (10 points or 5 points for junior records) or for earning an Olympic Games quota place (10 points). A recent change to badge criteria awards credit points to U. S. juniors who win medals in ISSF Junior World Championships or Junior World Cups. The “International Distinguished Badge Credit Points” chart at the end of this article provides details about how credit points may be earned.

Since the first International Distinguished Badges were awarded in 1963, 495 badges have been awarded, including 121 badges awarded to women. This total covers the total scope of U. S. international shooting history from 1920 until today and includes the badges that have been or are now being awarded for athletes who earned their badges in the last decade. 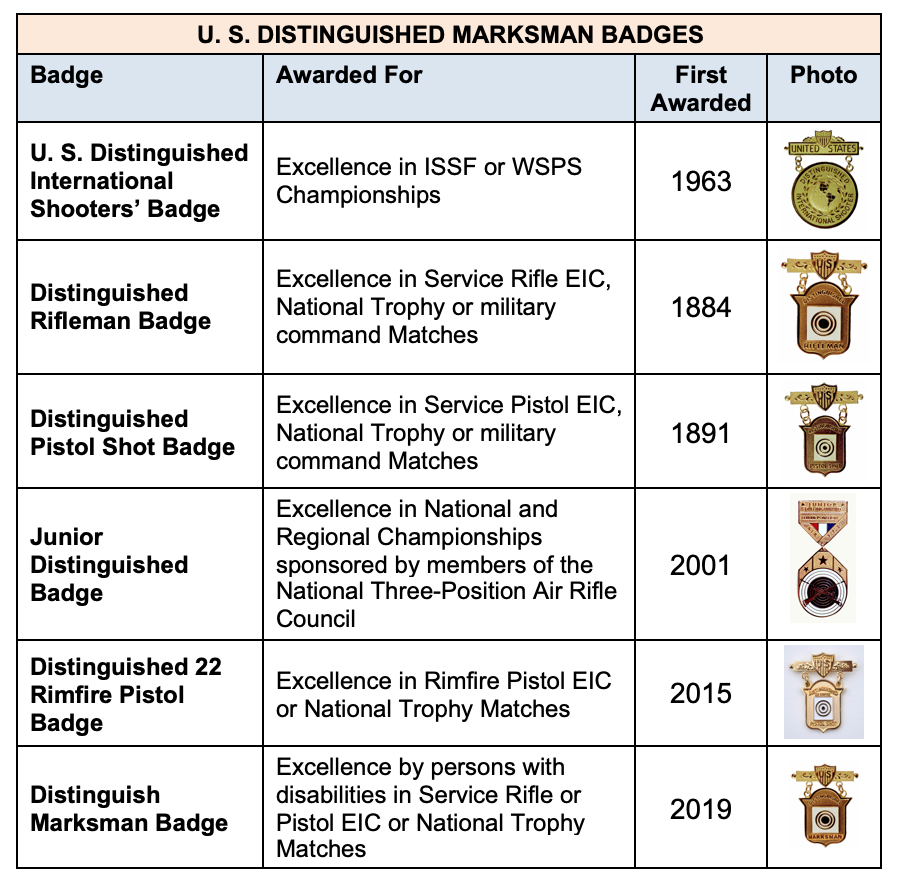 Current official regulations for the International Distinguished Badge appear in the CMP Highpower Rifle Competition Rules (https://thecmp.org/wp-content/uploads/HighpowerRifleRules.pdf) or the CMP Pistol Competition Rules (https://thecmp.org/wp-content/uploads/PistolRules.pdf). The chart below, which is published in these regulations, shows how and where USDISB credit points can be earned. A total of 30 points are required to earn the badge. 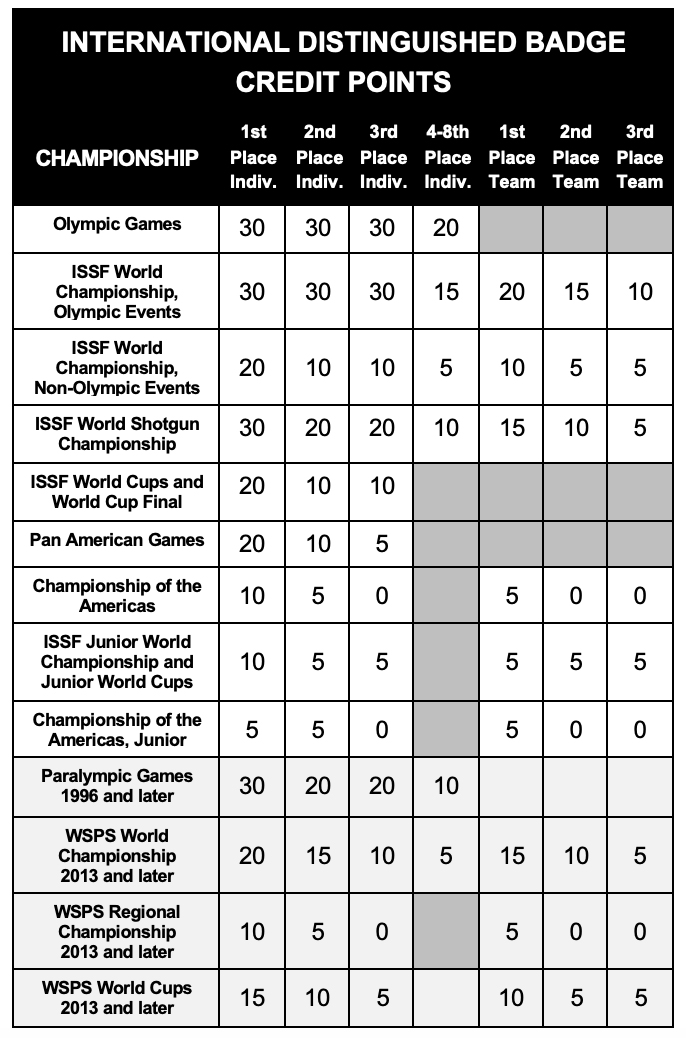 Any shooters who have earned EIC points in international competitions or in other Distinguished Badge programs can check their personal records on the CMP webpage at http://ct.thecmp.org/app/v1/index.php?do=reportShootersWithDistinguishedPoints. Anyone with questions regarding their credit point status should contact the CMP Competitions Department, Vera Snyder, [email protected], 419-635-2141, ext. 782.