At the recent Western CMP Games and Creedmoor Cup Matches in Phoenix, I received a box of the all-new .30-06 Match-Grade ammunition from Dennis DeMille of Creedmoor Sports. My job was to test the ammo (at the Games) and write about it. This box was part of Creedmoor’s 3-million-round production run for the Civilian Marksmanship Program (CMP). CLICK HERE for Ammo Sales.

The new .30-06 “Match-Grade” ammunition from Creedmoor is impressive. This ammo is made from top-quality components: brand new Lapua .30-06 brass and 167gr Lapua Scenar bullets. The ammo, optimized for 200-yard CMP Games tournaments, runs at 2720 fps. DeMille says the Standard Deviation (SD) is very tight with this ammo — comparable with precision hand loads. The low SD reflects great attention to detail in ammo assembly. Creedmoor’s industrial loader is run at half-speed to improve consistency. Charges are thrown precisely — I believe in two (2) half-charges. 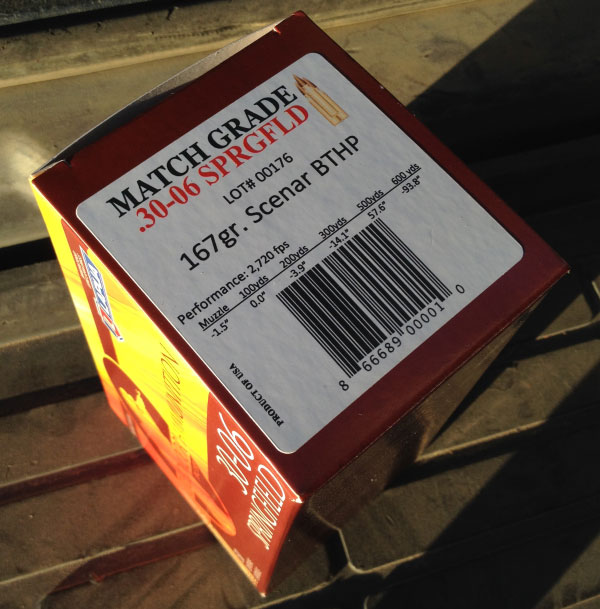 When you hold the ammunition up to the light, each round appears a perfect clone of each other round — something that cannot be said for some other factory ammo (even so-called “match ammo”). This is about a close as one is likely to get to a precision hand load. The good news is that Creedmoor plans to produce similar ammunition in other chamberings.

The economics of the ammunition are equally intriguing. This ammo is being sold by the CMP for $1.30 per round. Think about that — new .30-06 Lapua brass sells for around $100.00 per hundred cases. So, you get to fire a precision match round for about 30 cents and have premier once-fired brass for future use. The price per rounds tells me that CMP isn’t making money on this — it is being sold at near cost to promote marksmanship.

Great Ammo at a Great Price
In offering this new .30-06 ammo at an affordable price, the CMP is making it possible for non-reloading competitors to have the same quality of ammunition as those who handload with premium components. This will be a major improvement for shooters of m1903s and M1 Garands. I think this ammo can be real equalizer for those who do not currently hand-load their own .30-06 ammunition. The CMP and Creedmoor Sports are to be commended for collaborating on this game-changing product introduction. 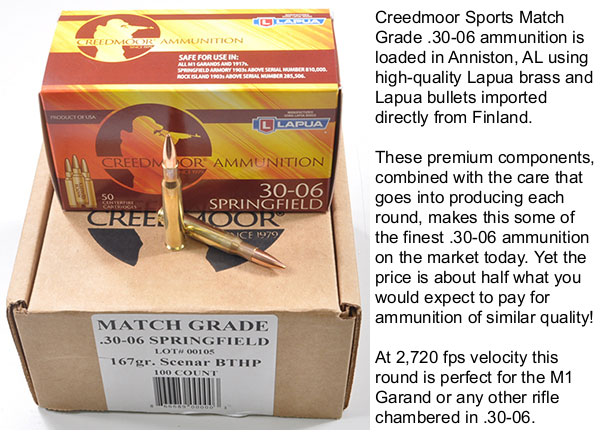 .30-06 Ammo Performance
When someone hands you a box of ammo with a challenge how can you not throw all your match plans out the door and play? I was planning to fire the CMP GSM match with my M-1 Garand the next day using 150gr SMK handloads but I said, “What the heck. Let’s go for it.” You get five sighters in a GSM match which is plenty to zero with new ammo.

The ammo is optimized for shooting 200-yd CMP matches with rifles like my as-issued DCM M-1 Garand. 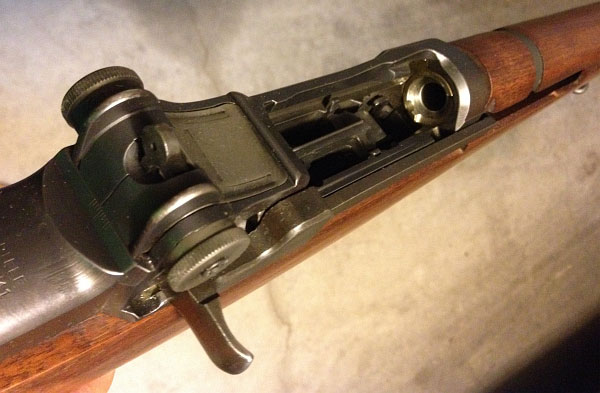 I shoot the M-1 Garand matches with a rebuilt 5-digit receiver gun with a 1950s barrel refurbished at Anniston Armory that I got from the DCM back in the day when the postman delivered them. It shoots true and has garnered its share of Western Games trinkets over the years including a number of golds and one of those coveted M-1 EIC 4 points medals. It’s a good platform for the test. Sighters revealed the Creedmoor ammo shoots about two minutes higher impact versus my pet load. The tale of the tape said 96-2X slow prone, 93-1X rapid prone and 81-1X offhand totaling 270-4X. The DCM machine took home a bronze in 2014.

Accuracy and Consistency
This Creedmoor ammo is indeed amazingly consistent. The slow prone stage was a pure joy to shoot. This ammunition is “brutally honest”. It will reveal every little error you make be it defocusing on your front sight drenching in sweat under the Phoenix sun, not being fast enough to reset your NPA mid-string in your rapid as the big gun moves you around or just being jittery on your feet during the back half of your offhand. With this ammo I felt confident to trust that any error was mine after each shot. There was no wondering about the ammo. I knew its feedback was accurate. That is a huge thing to be that confident in one’s gun and ammunition. I never felt that confident with HXP or even my handloads. If anything, I now know that even my ammo for the M1 Garand and M1903A3 will benefit from the same careful case preparation and assembly as my tactical rifle or long range ammo.

*At the Western CMP Games this Creedmoor .30-06 ammo was sold at a discounted price of $1.15 per round. That’s an example of the great deals one can get by attending CMP competitions.