With the 2016 Summer Olympic Games in Rio de Janeiro adding an extra element of athletic prowess and national pride to the year, the Civilian Marksmanship Program’s (CMP) Junior Rifle Camps took the opportunity to teach its participants corresponding lessons on mental preparedness and fundamental skills – the same training given to two former campers who made their debut at this year’s Olympic Games.

The CMP’s Junior Rifle Camps and Clinics train high-school age (9-12 grade) junior shooters on intermediate and advanced air rifle marksmanship skills through various exercises and demonstrations. More Outreach Clinics and Advanced Standing Camps were added for the 2016 camp season, with 12 Junior Air Rifle Camps, five Clinics and five Standing camps – the most standing camps in the history of the program.

Participation in the camps also slightly increased from 2015 and previous years, with a total of 1,131 campers attending in 2016. The affect of these participants sharing info from camps with others gives the camp material the potential to reach roughly 6,500-7,000 additional people. 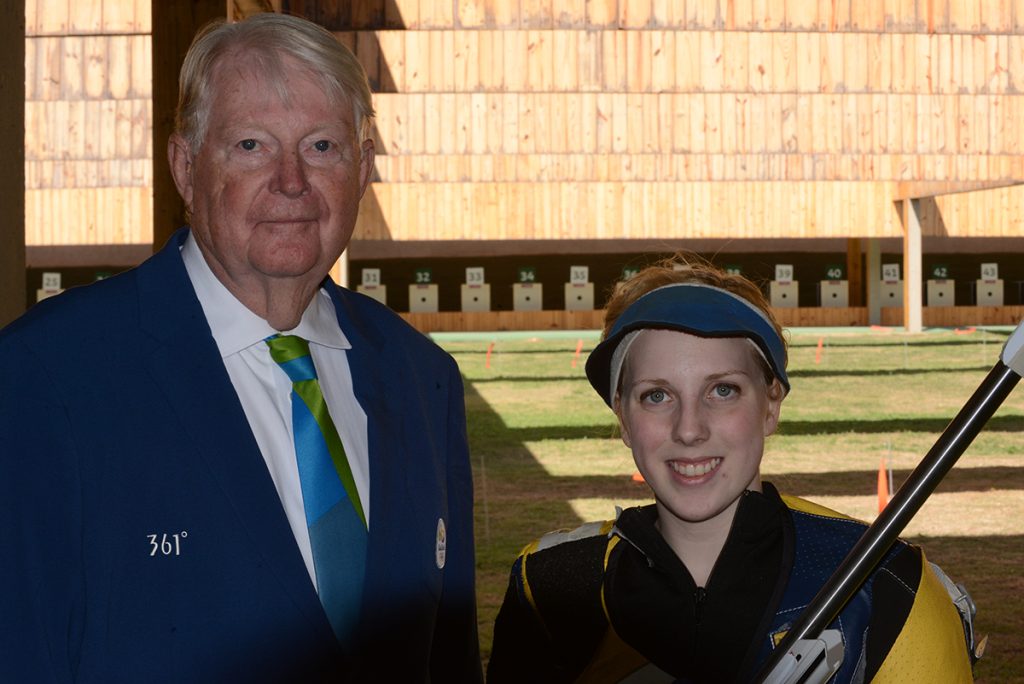 Exciting news in CMP Junior Rifle Camp history came when Ginny Thrasher of the West Virginia University rifle team became the first Camp alum to make the 2016 Olympic team that traveled to Rio this summer. She went on to become the youngest female ever to earn the first gold medal of the Olympic Games and set a new Olympic Record score.

“The Olympic Dream, and other big goals like NCAA Rifle Scholarships, become more real when these high school athletes get to see shooters who are practically their peers making the Olympic team, and when they get to interact with the NCAA athletes on our staff,” said Sommer Wood, Camp director. “Part of the great excitement of having two camp alumni make the 2016 team, and Ginny winning Gold, was the potential inspiration it could provide other young shooters.”

Other camp alumni making an appearance in Rio on the 2016 Olympic Team included Lucas Kozeniesky, who was also the first athlete from the North Carolina State rifle team to make the Olympic team and who is mentored by Jennifer Marshall – a former Camp counselor.

Sarah Scherer, who represented Team USA at the London Olympics in 2012 and again in Rio this year, is also a former Camp counselor, while Ashley MacAllister, former camp assistant director, coached the Puerto Rico rifle team in Rio.

“We did incorporate the Olympics heavily into the theme this year, as we do each Olympic year, even coordinating the staff shirts to match the Olympic Ring colors,” said Wood. “We wanted to get the point across that only a few years ago, members of the 2016 Olympic team were sitting in the same seats as our current camp athletes. We wanted the campers to realize that it is okay to dream big now, rather than push big goals like the Olympics into the future.”

She went on to say, “In fact, now is the best time for many of these young shooters to pursue big goals – when they have the support system, coaching, and most importantly, the time to put into training. It gets much harder to stay on track for those lofty goals as other life demands start to compete for a person’s time once he or she is an adult.”

Each summer, campers are trained by qualified student athletes from the top NCAA rifle teams in the country – the majority of whom had participated in the camps themselves as juniors. These camp counselors lead the juniors in discussions and drills during the camp in small groups where they are able to give each participant personal attention.

This year, 26 counselors, two gunsmiths, four assistant directors and two directors made the large operation work, along with the support of people at the CMP headquarters who were also vital to the success. The counselors on staff represented 13 different NCAA and College Club Programs.

Sommer Wood and Dan Durben are the chief instructors for the camp programs, with over 20 years combined air rifle summer camp counseling experience between them.

Both holding notable accomplishments of their own, Wood is a graduate of Clemson University, where she was an athlete on the air rifle team, while Durben is an Olympic athlete and former U.S. Olympic Rifle and Paralympic Shooting Team coach.

“In 2017, we will continue to provide comprehensive training through our Three-Position and Standing Camps,” said Wood. “After each Olympic quad, we evaluate the trends of the tops performers at the Olympics and make adjustments and additions if we see anything new.”

“We are still in the process now of updating the 2017 curriculum, and I am excited to see how it comes together,” she added.