The 2017 CMP competition rules are now approved and posted on the CMP website.  The 2017 21st Edition of the CMP Highpower Rifle and Pistol Competition Rules. 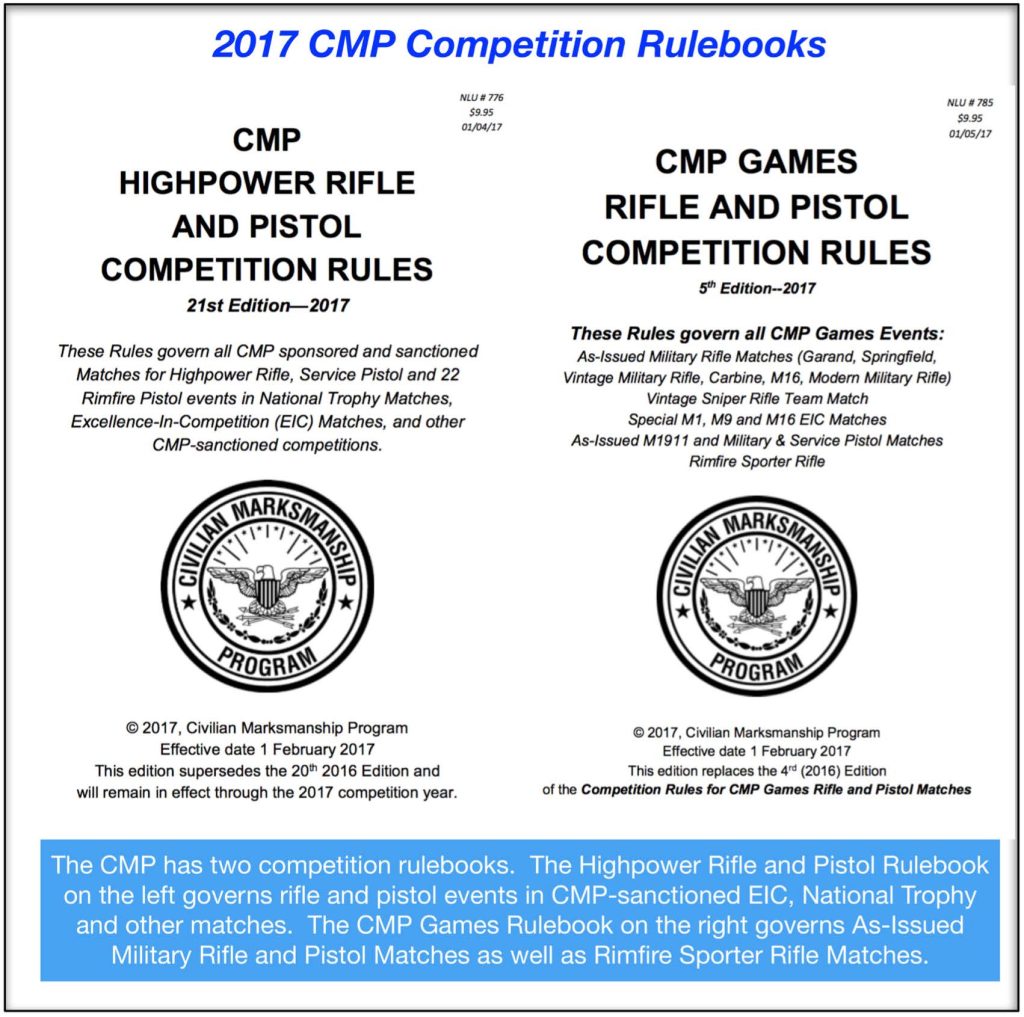 The release of the 2017 CMP Rules marks the third consecutive year with major competition rule changes.  The 2015 Rules opened Service Pistol shooting to a wider variety of pistols and introduced the popular 22 Rimfire Pistol Distinguished Badge.  The 2016 rules authorized limited power optical sights for service and modern military rifles and opened Service Rifle shooting to a wider variety of M16/AR-type rifles.  The 2017 rules authorize residents in states where AR ownership is prohibited to use an Alternative Rifle that is legal in that state.  Also new in 2017 is a competitor classification system and the opening of CMP sanctioned matches to Match Rifles.

The introduction of an Alternative Rifle rule exemplifies the CMP’s determination to take whatever steps are legally possible to ensure that all competitors in the USA can continue to compete in CMP Highpower Service Rifle competitions.

The new Highpower Alternative Rifle will allow competitors in states where the ownership or possession of M16/AR-type rifles is prohibited to use a rifle that has the same capabilities as an M16/AR-type rifle.  Alternative Rifles may be either semi-auto or manually operated and must be chambered for the 5.56 x 45mm NATO cartridge (.223).  Optical sights with a manufactured maximum of 4.5X are permitted.  These rifles must have a 4.5-pound trigger pull, a maximum barrel length of 20 inches and a fixed sling swivel on their fore-ends.  Alternative Rifles may have stocks with the same adjustment capabilities as Service Rifles, that is butt-stock length may be adjustable, but the cheek-piece and butt-plate must be fixed.  Stock design and magazine configuration is flexible according to what is permitted in the competitor’s state.

The 2017 CMP Rules will also open the door for Match Rifle competitors to shoot in CMP-sanctioned highpower events.  Due to the advantages these rifles have (more cartridge options, no trigger limitation, infinite stock adjustments and unlimited optical sight power), competitors with Match Rifles will usually compete in a separate or Open Individual Category, but they will now be welcomed in CMP Highpower Matches.  Traditional EIC and National Trophy Match events will still be restricted to Service and Alternative Rifles, but match sponsors can now invite Match Rifle competitors to shoot in CMP-sanctioned events.  Except for EIC and National Trophy Matches, which will continue to be no-sighter matches, the 2017 Rules will permit sighters in other matches.

Most Match Rifle competitors have already competed in CMP Matches with Service Rifles and are familiar with CMP requirements that shooters must start rapid-fire series from standing.  The CMP regards this requirement to quickly go from standing to sitting or prone and place the natural point of aim on the target as a vital skill that highpower rifle shooters should be able to perform.  However, some Match Rifle competitors who have never competed in CMP Matches will find this to be a new and potentially exciting challenge.  They will need to practice this skill a few times in advance of their first CMP match, but they will find that being able to do this adds another positive dimension to highpower rifle shooting.

The CMP rule making process is a yearlong process.  Competitor and match sponsor questions and comments come in throughout the year and are compiled and analyzed by the CMP Staff and its Rules Committee Advisors for presentation to the CMP Rules Committee.  Many recommendations come from the staff and officials who conduct the National Matches and CMP Travel Games or who conduct events on CMP ranges at Camp Perry, Anniston or Talladega.  CMP Shooters News ran a special request last fall for competitor and match sponsor comments and recommendations; there were many helpful responses.  The CMP Rules Committee met in September to make preliminary decisions on new rules.  A drafting and editing process followed that involved multiple conference calls to review drafts.  Final Rules Committee approval was decided in December 2016.

Here are summaries of other rule changes in the 2017 CMP Competition Rules.