CAMP PERRY, Ohio – It’s almost here! The 109th firing of the National Trophy Rifle and Pistol Matches on the ranges of Camp Perry are just around the corner. Though steeped in history and tradition, some changes have been made to the National Match schedule as well as the grounds of Camp Perry to allow an even more enjoyable experience for all in attendance. The following is a list of notable items.

The First Shot Ceremony, which will officially mark the beginning of the National Matches, is set to be held on July 11 on Rodriguez Range. Because of the rousing visual presentation scheduled for the ceremony, Niagara Road will be blocked just north of the Commercial Row entrance, and Lawrence Road will be closed on either side of Shooters’ Memorial Plaza. Those attending the event will need to drive east around Building 3 to get to Lawrence Road East and west around Commercial Row to get to Lawrence Road West. Though traffic will be rerouted, parking will still be available around Camp Perry.

Kicking off another season of national shooting competition is the Rimfire Sporter Match on July 9. Unlike the last two years, the match is scheduled a few days before the First Shot Ceremony rather than after the conclusion of the Matches. A free instructional Rimfire Sporter Clinic will be held Friday, July 8, from 4-6 p.m. and will include demonstrations and presentations by qualified members of the CMP. The clinic will cover rules, Course of Fire, safety instructions and competition procedures.

A few events will be changing ranges this year, including the Carbine and Rimfire Sporter Matches (normally held on Rodriguez Range). The matches will take place on Viale Range to make better use of the space between the 400 and 500 yard lines. The change will accommodate an extra Carbine Match relay for those in the National Trophy Team (NTT) Match who wish to also compete in Carbine.

Along with the CMP Memorabilia store (located in Building 3 at the National Matches Welcome Center, near registration) that gives visitors a place to purchase shirts, water bottles and other various gifts, Building 3 will also house a temporary Creedmoor Sports store July 21- Aug. 1. The store will contain equipment, ammo and other quality products sold by Creedmoor Sports, Inc.

Air rifle and air pistol opportunities are scheduled throughout the National Matches. Open Practice days will be held in July and August for anyone wanting to come into the range to beat the heat and fire upon the CMP’s state-of-the-art electronic targets. Formal air pistol events will take place July 10-18, followed by air rifle events July 21-30. While inside, be sure to check out the display cases filled with authentic Olympic memorabilia and other fascinating items from the career of Gary Anderson. 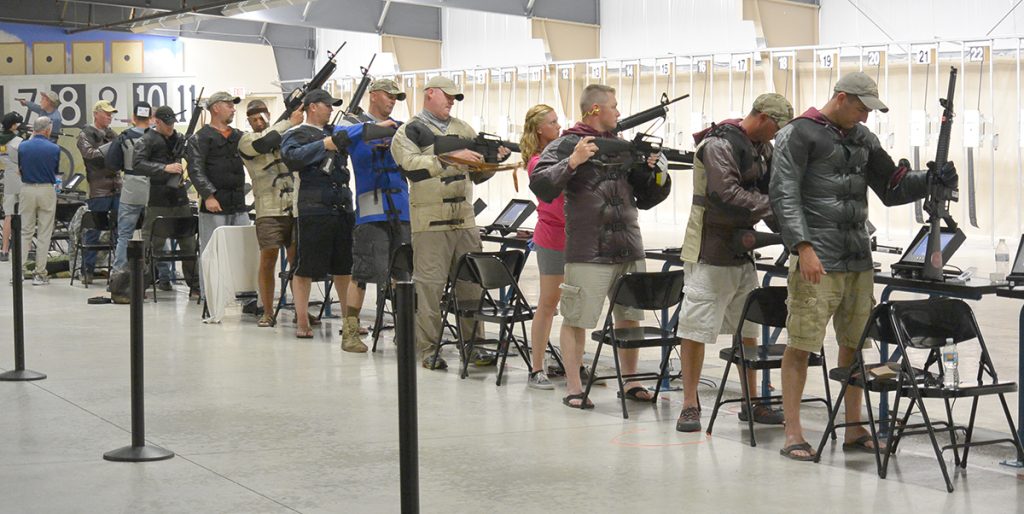 As matches fire on the outdoor ranges, the Gary Anderson CMP Competition Center also hosts a variety of indoor air rifle and air pistol events during the National Matches.NEW ELECTRONIC TARGETS! And Other Range Improvements:

Petrarca Range will soon contain Kongsberg electronic targets at 100 yards. The placement allows greater usage and 200-yard simulation by using 100-yard reduced target faces. Normal highpower rifles can be fired upon them, along with the M1 Carbine (a 100-yard max gun). Rimfire Sporter can also be utilized by setting up 50- and 25-yard firing lines in front of the new targets.

During the National Matches, five portable pistol targets (capable of being set up at 25 or 50 yards) will be superimposed for display and available to competitors for rifle and pistol use at designated periods. Visit the CMP office for a list of scheduled times for your chance to shoot on these state-of-the-art targets, or stop over to Petrarca for a demonstration!

Additional improvements to Petrarca include sound deadening material added to the interior ceiling of the firing line structure as well as a dividing wall to create a more controlled environment (to be used for firing line operations and as a classroom). New doors and lighting have also been added to the structure, and berm work has been constructed downrange.

Also, the Ohio National Guard put more than $900,000 worth of improvement into Camp Perry in 2015, making enhancements such as drainage and berm updates to Viale and Rodriguez as well as extensive repairing to the RV Park shower floor. The roads alongside the ranges have also been chipped and sealed to reduce the stirring of dust.

Though past awards have been held on Petrarca Range, this year’s celebration will take place on the CMP Headquarters Building front lawn. Everyone is welcome to join as the CMP celebrates its 20th anniversary at this year’s National Matches!