Taylor Farmer, 18, of Castalia, Ohio, was born to persevere.

Her entire life, cerebral palsy (a neurological condition that limits muscle coordination) has led her to have to work just a little harder than others to achieve her goals. The effects of the disease on her body cause her to walk with crutches and to use a wheelchair when she moves across long distances – but that hasn’t slowed her down.

In fact, with the incredible help of someone who happens to know exactly what it’s like to be in her seat (so to speak), she has learned to thrive at lightning speed. Or, you could say, at the speed of an air rifle pellet.

As a teenager, Taylor began shooting rifle with her dad and her older brother. Though her medical ailment makes certain activities more difficult than they are for the average person, she never let it get in the way of her desire to shoot.

“I didn’t really think of it as being a challenge. I just wanted to do it,” she said, matter-of-factly.

Taylor started building her marksmanship skills with a .22 rifle as a member of a local conservation league as well as a junior 4-H club. Right away, her 4-H coach, Mary Ann Miller, recognized Taylor’s talent and wanted to connect her with someone who could teach Taylor not only the fundamentals of competitive shooting, but the other, more unique elements that Taylor personally will face. Immediately, Mary Ann knew just the right person.

Greg Drown, 56, was a member of The Ohio State University Rifle team from 1980-1984 – serving as team captain his junior and senior year and earning numerous gold medals throughout his career in college and beyond. He even competed in the 1984 Olympic Team Tryouts in Los Angeles and has been a State Champion in Three Position Air Rifle and Smallbore (.22) Prone again and again over the last three decades.

Though his accomplishments are already astounding on paper, a further look into his story shows more than just an incredible marksman – Greg is a model of mental strength and endurance. 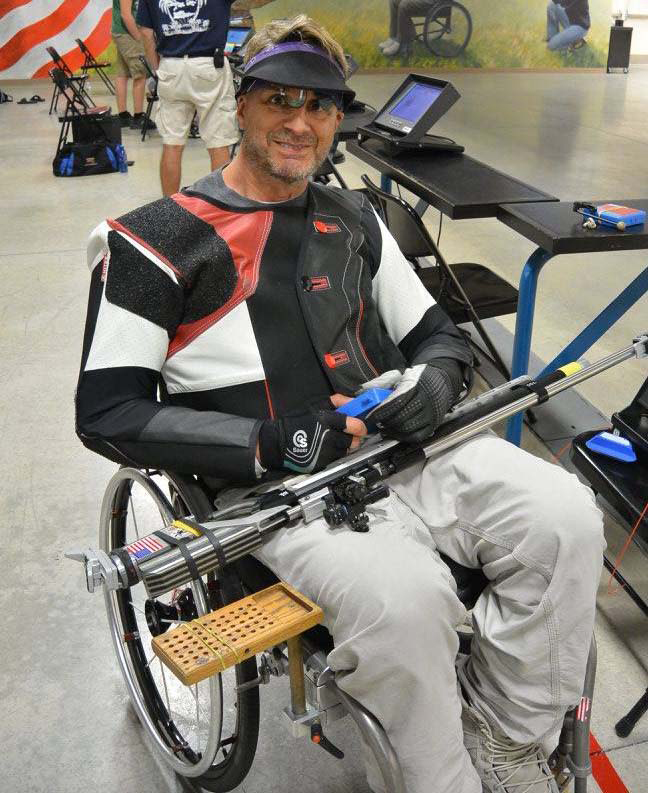 From 1995-2000, Greg gradually developed multiple sclerosis, a disabling condition of the central nervous system. His disease placed him in a wheelchair, but his determination kept him moving further into his shooting career (and winning a slew of gold medals and championships).

“It was a daunting task to re-learn the positions, not to mention shooting out of a chair with an attached table,” he said. “I had my trials and tribulations, but it took three or four years to become competitive again.”

With determination, Greg reached the pinnacle of his career by winning the 2009 3P Any Sight National Championship at Camp Perry. He also made it to a Para World Cup in 2011.

In September 2015, Greg and Taylor finally connected for the first time at the Gary Anderson CMP Competition Center air rifle range, during the Ohio Day at the Range event at Camp Perry – designed for children and adults with disabilities and their families to come together to fish, make crafts, learn about nature and, of course, shoot air rifle.

“I grabbed a sporter rifle off the rack and Taylor began shooting off the foam rests,” Greg said. “She consistently put 20 or so shots in the 10 ring.”

Taylor then asked Greg if she could get rid of the rest and shoot out of the adapted standing position while seated in her wheelchair. To Greg’s amazement, she continued to put shot after shot in the 9 and 10 ring – all without a coat and glove.

“Right then and there, I knew I had something special,” he said. “I kept telling her over and over how well she was doing, and all I got back was this simple expression of ‘I can do this – this is easy.’”

Greg mentioned the CMP’s Open Public Shooting on Tuesday and Thursday nights, where anyone can come to the range to shoot air guns. He then, without hesitation, offered to use those times to help Taylor advance her skills – as her new coach.

“A star was being born – that sounds corny, but it was true,” Greg joked. “I was just as excited as she was when we left that day.”

As a coach, he carefully observes her shooting to improve her growing marksmanship skills. But one of the most important things that makes Greg an extraordinary mentor for Taylor is when it comes to understanding something that not all marksmen can – shooting from a wheelchair.

“Right now, she is shooting world-class qualifying scores, and I show her what she is capable of and that there is no reason she cannot be competitive in the Para World Cup circuit,” Greg said.

Through his teachings, Taylor has genuinely connected with Greg as a trainer and a human being, saying, “If I wouldn’t have had him as a coach, I wouldn’t be where I am today. He can just comprehend some things better.”

Taylor’s first taste of competitive air rifle came right away in September 2015, at a 60-Shot CMP Monthly Match at Camp Perry. Without a glove or a jacket of her own to use, the match turned out to be more difficult for her than she thought – both mentally and physically.

“I was pretty nervous,” she said. “I didn’t do the best, but over time, I got better and better.”

Now fully equipped, Taylor is becoming a regular at air rifle events. Though less than a year into her career, she has shot in every 60-Shot CMP Monthly Match. In December, she fired at the Junior Olympic Qualifiers match where she fired 381 – a shot above the 380 cut-off score. Unfortunately, disabled shooters aren’t currently recognized, and she wasn’t able to fire for record at the Junior Olympics.

The following March, at the 60-Shot NRA Air Rifle Sectionals at The Ohio State University in Columbus, Ohio, she recorded a score of 580/600 to earn second place overall – not bad for her first match on paper targets. Just a few weeks later, she fired a score of 395/400 to receive her first gold medal at the 40-Shot NRA Junior Sectional Match at the University of Akron in Akron, Ohio.

“I didn’t think, since I had just been shooting since September, that I could go that far,” she admitted. “But, practice makes perfect.”

And practice, she does. Since September, her incredibly supportive parents, Dennis and Princetta, have made the 25-minute drive to the air range at Camp Perry every week, twice a week, for practice during Open Public Shooting. They plan on continuing her training, even after she graduates from high school in June.

“Taylor is a very determined young lady,” Greg said. “Her accomplishments and abilities keep amazing me every time we train and compete . . . She has shown in training and in matches that she has what it takes.”

This summer, Taylor plans to visit Fort Benning, Ga., where she hopes to be classified by the International Paralympic Committee on her degree of impairment in the sport. From there, she’ll keep her eyes on her ultimate goal – earning a spot on the Olympic team during the 2020 Olympics in Tokyo.

Greg, after overcoming discouraging obstacles during his own lifetime, is focused on helping Taylor reach her goals. And, without knowing it, Taylor has aided Greg in return by fulfilling one of his life aspirations through their incredible bond on and off the firing line.

“My goal all along has been that if I could make a difference in just one person’s life, it would make it all worthwhile to me,” he said. “It’s hard to explain – there is something God-like here. It was really meant to be that there is this special coach-student relationship. I truly feel I have seen this young lady grow and become more mature – from that first day.”