Several service rifle competitors got a jump on the National Matches at Camp Perry by taking advantage of a series of matches on June 22 and 23, conducted by the Civilian Marksmanship Program and the Ohio Rifle and Pistol Association. CMP shooters led off with an 800 Aggregate match, EIC Match and CMP GSMM reduced course match on Day 1.

ORPA shooters fired their State Rifle Championship on Day 2 and all service rifle matches were fired on wireless electronically-scored targets on Viale Range. The Petrarca covered range was home to the GSMM 100-yard reduced match. All matches contributed to a developmental process that will eventually bring electronic targetry to the National Matches in future years.

A total of 107 competitors participated in the morning CMP 800 Aggregate and 98 followed in the CMP EIC Rifle Match later in the day. Of that total, 79 shooters were eligible to earn Excellence-In-Competition points toward their 30 required to earn the Distinguished Rifleman badge – one of the most prestigious awards many shooters strive for.

The matches featured upgraded wireless scoring tablets, provided by Kongsberg Target Systems (KTS) of Norway – CMP’s partner in electronic target scoring. For expediency, shooters opted to shoot standing and sitting positions consecutively rather than being separated by another relay. 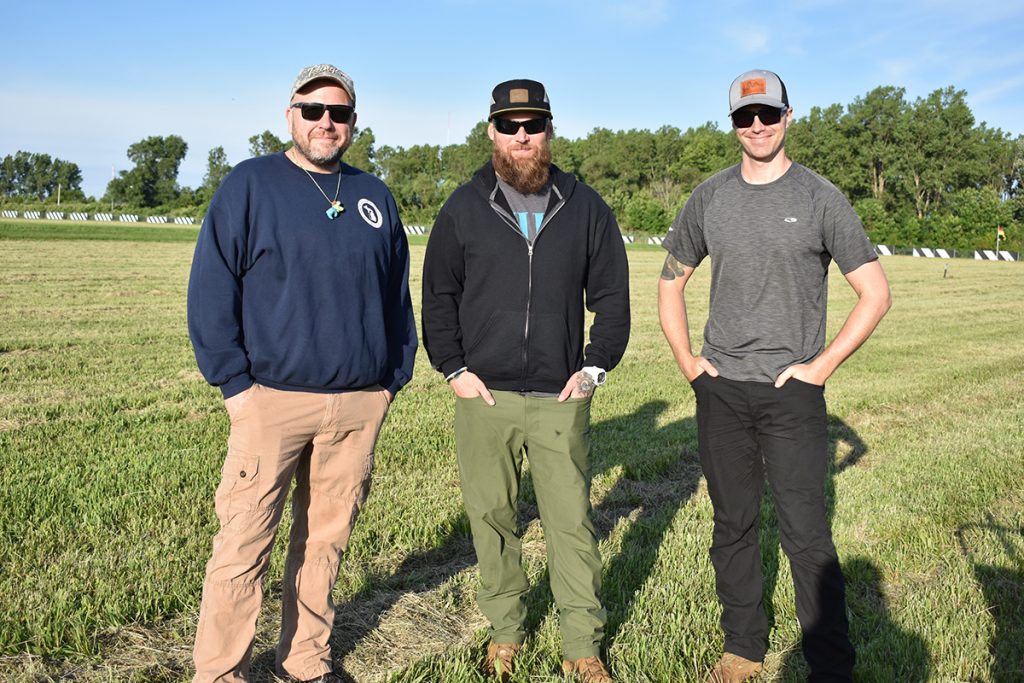 As with paper targets, the first relay fired the match while the second relay recorded scores from the wireless tablets, counted brass during rapid strings and acted as another set of eyes for safe conduct of the match.

The match was delayed at one point due to wireless bandwidth issues. Normally a match technician with a single diagnostic tablet monitors match conduct but for this match CMP elected to use four diagnostic tablets to help more staff learn the system. CMP reverted to the solo system and it involved resetting electronics in the pits.

Despite the delay, the matches still concluded sooner than if the match was run with pit-served paper targets.

Competitor Chad Hanson, 38, of Coatesville, PA, who earned his Distinguished Rifleman badge on Saturday, said “They handled it well, and tried to keep the match moving.” He said it was clear the fix was going to take a while, so we were able to get out of position. “With no rain and a cool breeze, no one seemed to mind the delay. The rest of the match went on without major issues.” 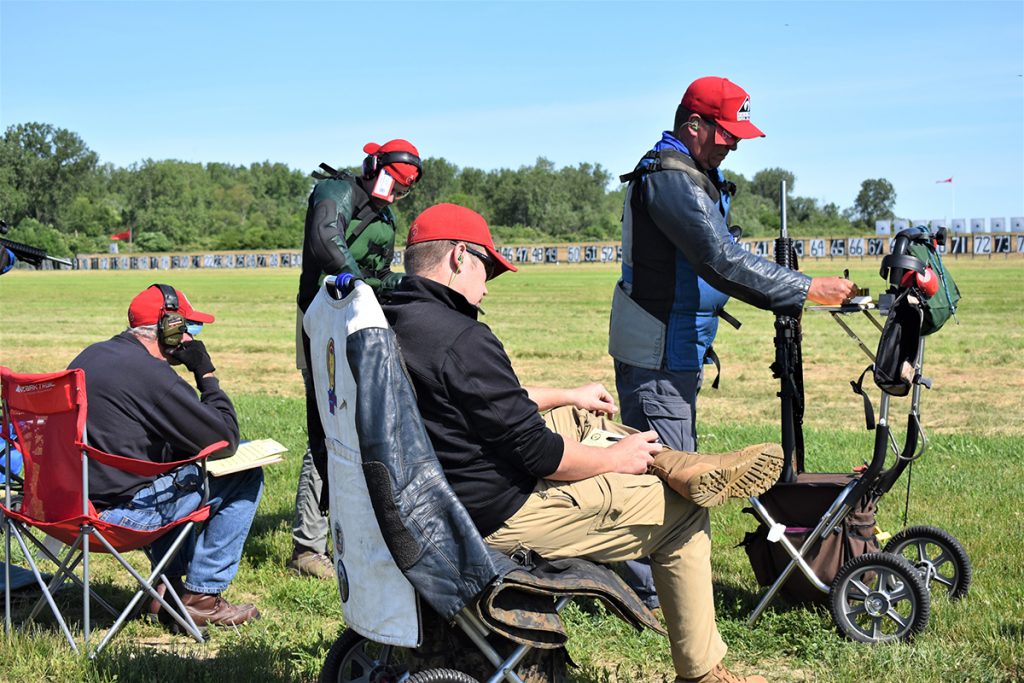 The match attracted some competitors from out of state who had never before fired on KTS targets. Max Crotser, 26, of Fairport, NY, and the New York Black Coyote Service Rifle Team, was one.

“It’s definitely a good idea as far as speeding the matches up, making things easier for older shooters, things like that. I’ve always run pits, going to Perry, I’ve always kind of liked it. It’s a pain in the butt, but it’s part of the whole experience for me, so not having that was different - the targets are definitely fun.”

Prosser repeated his top-three performance in the EIC match, claiming third overall with a 485-20x, behind Marc Burnes and Matt Gorby. Burnes, 33, of Landsville, PA, took first place with a 487-14x, earning him a ten-point leg. Distinguished Rifleman Gorby, 46, of Trufant, MI, shot a 486-21x, putting him in second place.

A total of eight legs were awarded following the EIC match. Maj Bryan Thomas Bittner, 34, of Monroeville, OH of the USMCR, Prosser, and Matt Thourot, 49, of Whitehouse, OH, earned eight-point legs while David Clark, 50, of Osceola, IN, William Thomas Collins III, 49, of Maumee, OH, Hanson, and Karee Hutson, 15, of Bridgeport, WV, each earned a six-point leg. 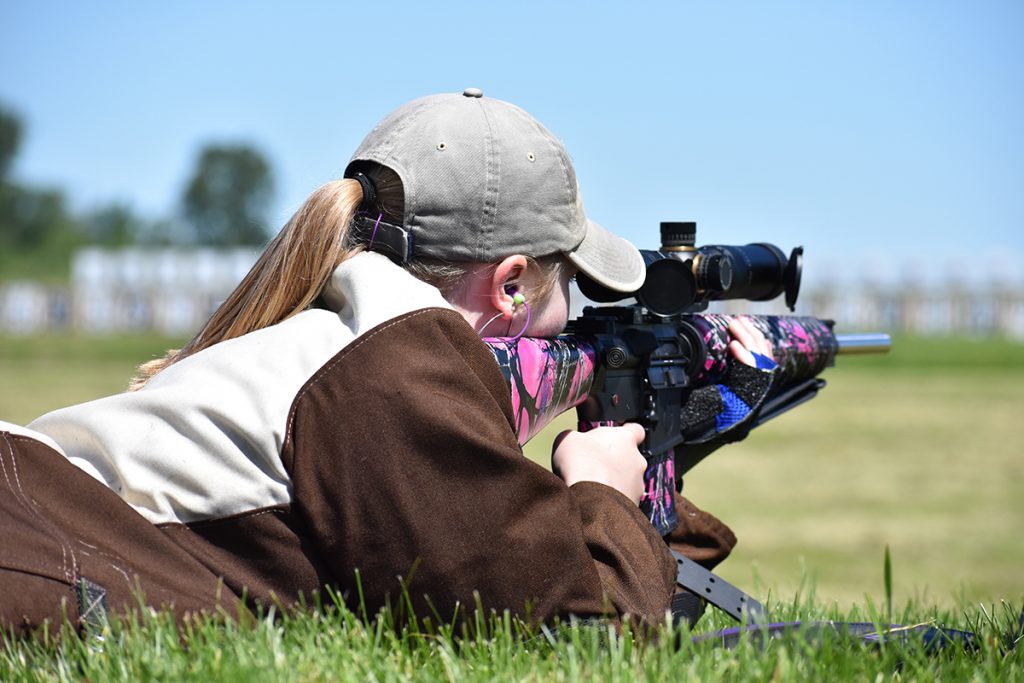 Karee Hutson earned a six-point leg in the EIC match with a 483-10x after finishing the 800 aggregate with a 770-24x, one point lower than her personal best in an 800 aggregate.

Though a human scoring error initially left the junior Hutson out of the preliminary results list, she was overjoyed to learn that she had earned an EIC leg, calling her first day firing on electronic targets “an experience I'll never forget.” Hutson revealed that mental training can have a significant effect on scores.

“During the EIC leg match, I made a mistake that I felt cost me a shot at points. My dad has worked really hard with me about leaving my mistakes behind and not taking them to the next firing line and I felt this was the best time to take his advice and see what comes of it.  That's when everything started to fall into place. When the match was over, I had shot a career best 483-10,” she said.

Tenacity has a different meaning for newly Distinguished Rifleman Hanson.  “I am very stubborn. I’m Swedish, it’s a trait. It’s like a long joke in our family. I told my dad, ‘Hey, I finished my badge and legged out in a match where statistically there’s pretty much no way I should have been able to shoot a 480 with an 85 in offhand.’ So, I thanked my dad for his Swedish genes.” 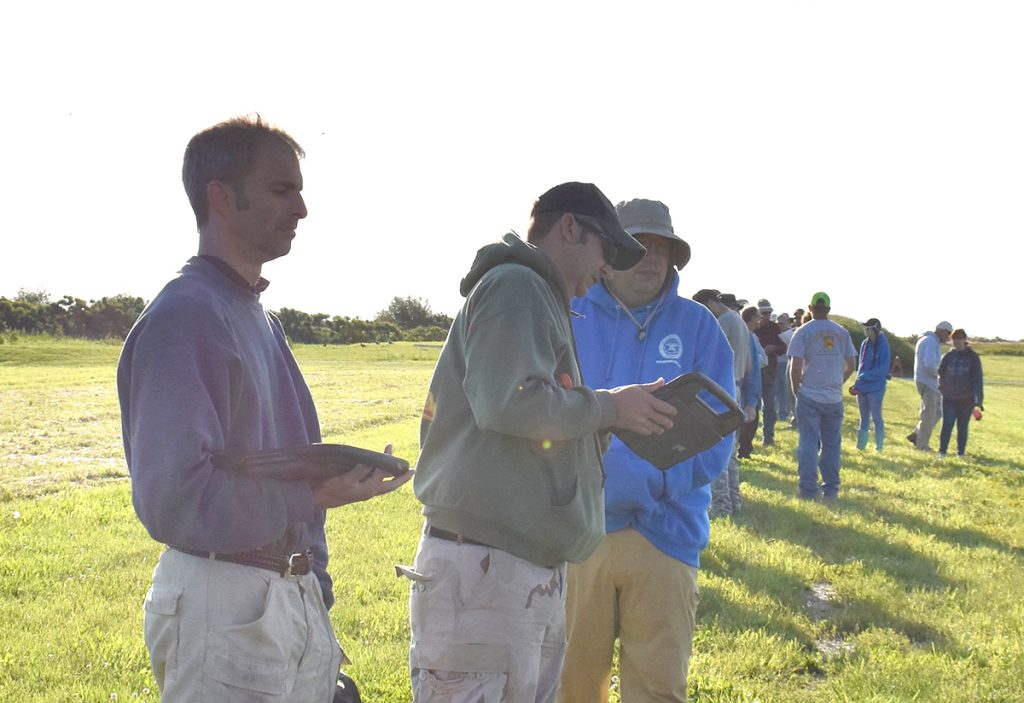 Sean Prosser, Chad Hanson, and Michael Curry (left to right) check the monitor settings before the start of the KTS CMP 800 Aggregate. The EIC Match followed the 800 Aggregate Match and both Sean Prosser and Chad Hanson earned their final EIC points towards their Distinguished Rifleman’s Badge.

Hanson, who has experienced the highs and lows of the CMP technology curve, said “I was thinking, ya know, this was the match that was a giant disaster in 2016 and kind of caused me to lose my faith.

“I asked myself ‘wouldn’t it be great if I could go up there and leg out…it would be like poetic justice…the same match three years later that made me hate everything.’

Hanson did leg out, earning the six points he needed to finish the badge. As if this was not enough, he earned his badge on the same day as his friend and fellow Pennsylvanian Sean Prosser. Hanson originally asked Prosser “Wouldn’t it be great if the two of us could leg out together? Sean and I have shot together over the past year or so…he needed eight points and I needed six and we were thinking, oh well…what were the chances of that happening?”

To add to the drama, Prosser noted that his quest towards the badge truly began less than a year ago. “I had no idea about the Distinguished Rifleman badge. All I wanted to do was get my master class with irons, so I did that.

Prosser started service rifle in 2016 with an M1 Garand. He had learned of the sport from a friend who graciously let Prosser borrow his equipment. “Up until six months ago, I was wearing gear that was 30 years old, the jacket was four sizes too big for me.” Even without his own equipment, Prosser managed to earn points towards his badge in 2018. His first EIC match was actually in December of 2017, though he attended thinking it was like every other match, surprised by the absence of sighters and the command for shooters to stand before rapid-fires.

Though now well-acquainted with the Distinguished badge program, this was Prosser’s first time at Camp Perry. “That range, what a gorgeous place - I am coming out for the Nationals… and I will get to walk on stage, so I am happy about that!”

Hanson has lots to report on GarandThumb.com, his blogging platform, as he and Prosser now have what he terms “adorable consecutive badge numbers.” While any number of EIC points on any day is an accomplishment and earning the Distinguished Rifleman’s badge is a great honor, for these two friends the badge will have even more meaning.

Though annual mayflies made their presence known, veteran competitors who attended the previous year were incredibly grateful that their numbers were not nearly as high. In 2018, the spaces between yard lines were battle zones, competitors having to stop every so many yards to clear the bugs from their glasses.

View full results from the Viale Matches at https://ct.thecmp.org/app/v1/index.php?do=match&task=edit&tab=results&match=17821. Photos may be viewed at https://cmp1.zenfolio.com/f891182600.

Interested in earning your Distinguished Badge? Find out the details on the CMP website at http://thecmp.org/competitions/distinguishedbadges/. To find an EIC match near you, visit https://ct.thecmp.org/app/v1/index.php?do=matchRegistrationListUpcoming&filter=designation&filter_value=EIC. 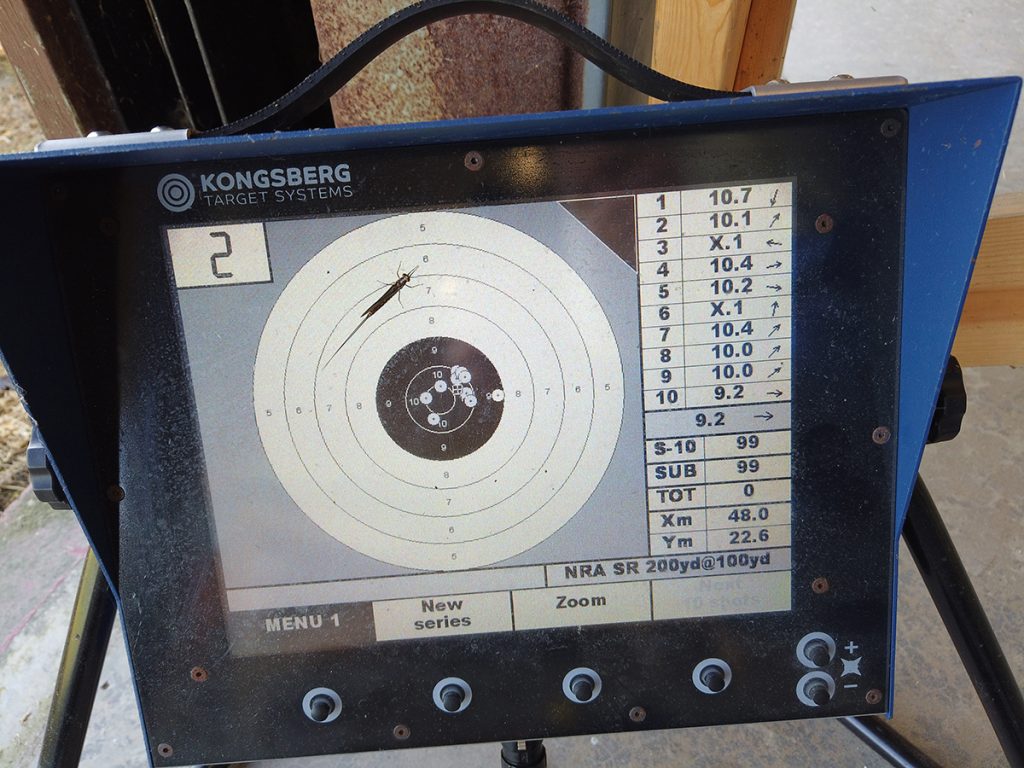 CMP Targets at Petrarca Range have monitors at each firing point and competitors can view their shots as the complete the match.

On Petrarca Range featuring CMP Targets, competitors were able to shoot vintage or modern military rifles throughout the weekend. Twenty-eight competitors took advantage of this opportunity. Congratulations to the following match winners:

Full results are posted at https://ct.thecmp.org/app/v1/index.php?do=match&task=edit&tab=results&match=17820.