Just the title of the “National Matches” can scare even the most seasoned shooters. For juniors (those younger than and through his/her 20thbirthday), or those starting off in the shooting sports, attending the National Matches is something that some put off until they feel “ready” enough. In reality, the National Matches is a fantastic place to get started shooting with the Civilian Marksmanship Program’s many clinics, not to mention an enthusiastic and helpful crowd of shooters from across the country. 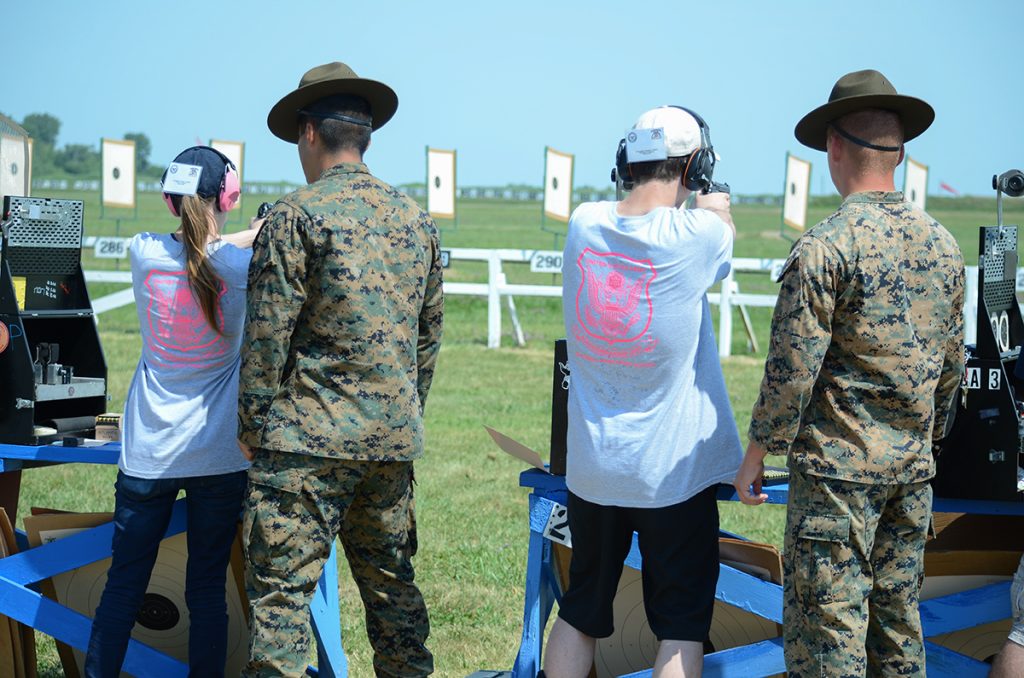 Participants must be at least 12 years of age and firing a .22 rimfire pistol to attend the Pistol SAFS. (If the applicant is qualified and can safely handle a pistol and is under 12 years of age, the parent may submit an age restriction waiver for review.) The Pistol SAFS is a great event for new shooters to learn from qualified instructors and shoot with family and friends. Safety training, position work, one-on-one training, ammunition and a gun are provided for use. There is also a match at the completion of the course.

This match traditionally consists of four firing members, but juniors compete for the Junior Pistol Team Trophy in teams of two. The 30-shot Pistol National Match course is fired. 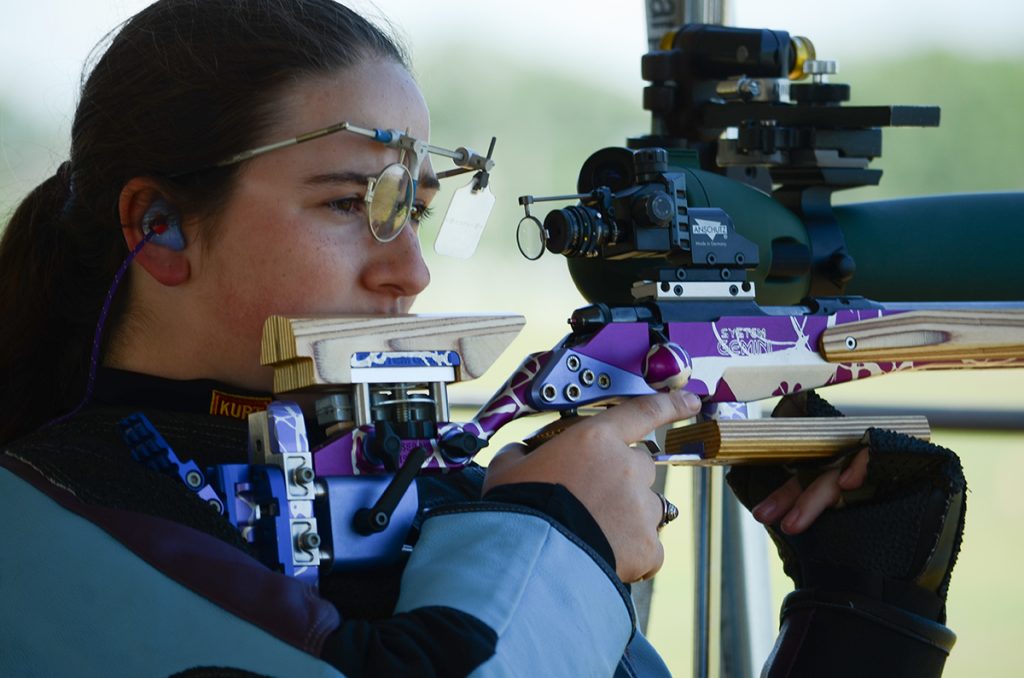 Focus is critical in the standing position – resting between each shot is paramount to good scores.

After a successful premier in 2018, the CMP will again be bringing Smallbore back to Camp Perry in 2019. To enhance the schedule, changes have been made to this year’s Prone Championship, and the CMP has purchased new smallbore rifles for a newly developed Smallbore Small Arms Firing School (SAFS). The goal of the SAFS class is to provide new opportunities to junior shooters in an effort to grow the smallbore shooting community. The SAFS class will be instructed by the renowned U.S. Army Marksmanship Unit. The Smallbore lineup will also feature three-position individual and team events.

The Rimfire Sporter clinic presents an opportunity for individuals who do not have access to equipment for air rifle, smallbore or highpower service rifle to compete and enjoy the National Matches. This is a great way for juniors to get started as it requires minimal equipment and expense. The CMP offers a training clinic as well as a match for rimfire sporter. It is designed as a recreation-oriented competition limited to .22 caliber sporter rifles. There are three classes: the “O class” for open-sighted rifles, the “T-Class” for rifles with telescopic sights or rear aperture sighted rifles and a “Tactical Rimfire” class for a .22 caliber A4 or AR15 style rifle. Firing is conducted from 25 yards and from 50 yards. The current National Record, a perfect score of 600x600, was fired in 2015 by a junior, Samuel Payne.

This series, fired before the traditional National Matches, offers competitors a chance to shoot on CMP’s electronic targets, powered by Kongsberg Target System technology. The first day includes a four-person team match. The rest of the Cup Matches are two days of 1,000-aggregate matches. Rapid-fire stages begin from position. Each 1,000-point match has four stages with two sighters per stage: 20 shots standing at 200 yards, two series of 10 shots rapid-fire sitting or kneeling from 200 yards, two series of 10 shots rapid-fire prone from 300 yards and two series of 20 shots slow-fire prone from 600 yards. 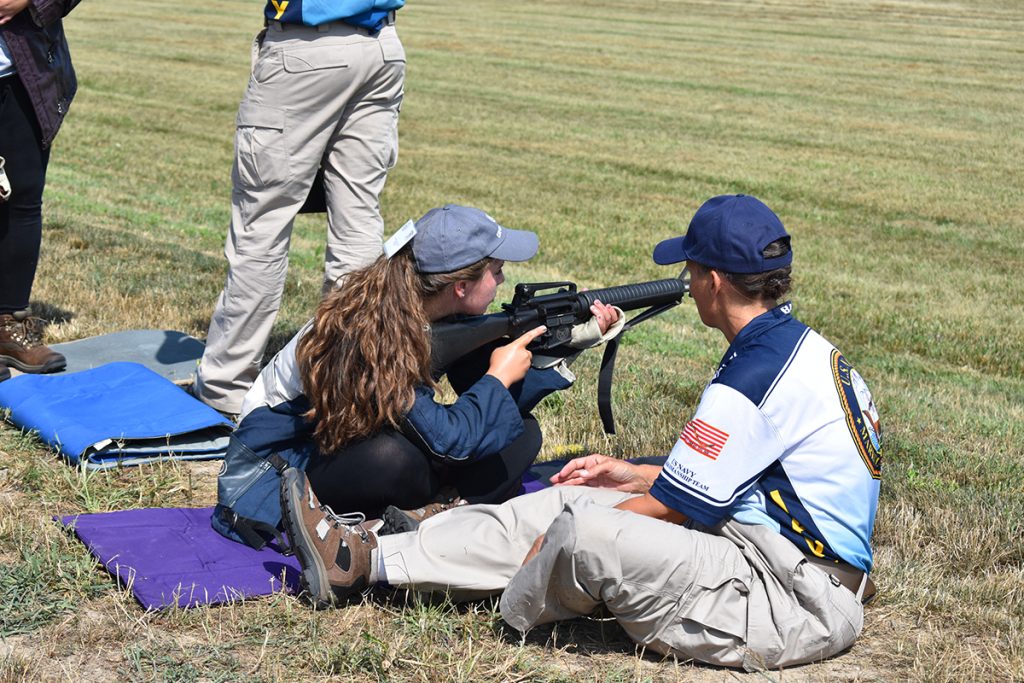 The rifle Small Arms Firing School is a wonderful way to introduce juniors and adults to highpower service rifle. Even if people do not pursue competitive service rifle, SAFS teaches them firearm safety, handling practices, shooting fundamentals and how to properly use an AR-15. The Army Marksmanship Unit takes a starring role in largely coaching individual competitors, though trained CMP instructors and other military marksmen also help lead the class. Ammunition and a rifle for use during SAFS is provided. Participants receive training and can participate in a match the next day. The top 10 percent of non-distinguished competitors in the match earn four Excellence-In-Competition (EIC) points towards the Distinguished Rifleman’s Badge. An advanced SAFS is available for returning students and/or more accomplished shooters. 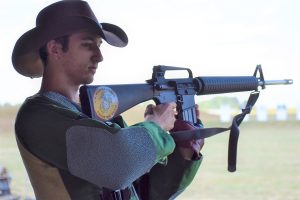 Juniors dry-fire from the standing position during the 2018 USMC Junior Clinic. During the clinic, juniors work on dry-firing from each position before live-firing on the second and third days of the class.

The CMP/USMC Junior High Power Clinic is an annual favorite of many juniors. This class, taught by the United States Marine Corps, offers an in-depth look into position work and also includes a live fire portion at 200, 300 and 600 yards. This clinic gives juniors a chance to interact and receive individualized training as well as to confirm zeroes prior to the rest of the National Matches. This course is for juniors who have completed SAFS or have prior marksmanship experience.

The CMP Advanced High Power Clinic is designed for seasoned shooters, juniors and adults who are looking for position-training and looking to remedy specific issues they face in improving their high power service rifle competition scores. The clinic includes a classroom portion and a dry-fire portion and is taught by members of Team CMP. 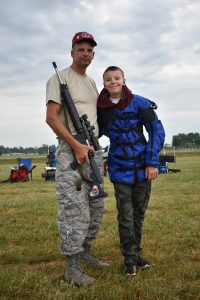 MSgt Garey Diefenderfer and his son Grant shoot the National Trophy Individual Rifle Match. The National Matches allow many opportunities for families to learn and compete together.

The Hearst Doubles Match is another alternative for juniors without a coach or pit-puller. Two competitors pair-fire and pull targets together. It is a great match for parents and children to shoot together. 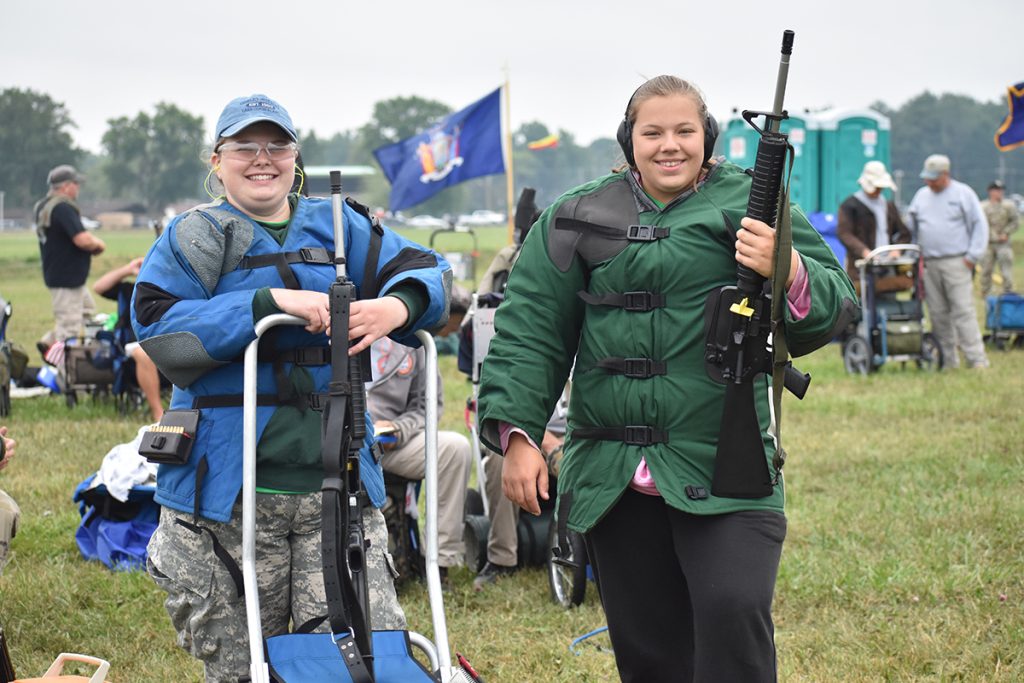 The NTT provides a unique opportunity for juniors and adults to shoot side by side with their teammates and spend time off the firing line together. Many lasting friendships are formed and strengthened here. Shannon Heist (left) and Brianna Haynes (right) of Zanesville Rifle Club wait for their turn to pair fire from the standing position at the 200-yard line.

The NTT match is a coached match with six firing members on a team. There are both junior and adult teams. Each competitor fires the National Match course of fire. The team score is the aggregate of all six members’ scores.

The NTIT is a fun match where teams strategically fire 384 rounds in total, all rapid-fire for varying amounts of points which vary by the yard line. Hits on a silhouette target earn different points, most from the furthest distance. Teams advance together in a line with other teams. There are four 50 second stages: prone from 600 yards, prone, sitting or kneeling from 500 yards, sitting or kneeling from 300 yards and standing from 200 yards. There are both junior and adult teams for this match, fondly called the Rattle Battle.

These one-hour long clinics are free of charge and review the rules and courses of fire for the Garand-Springfield-Vintage Matches. Scoring techniques, target pulling rules and shooting positions are discussed. These are great introductions and required for new CMP Games competitors, but they are open to all. 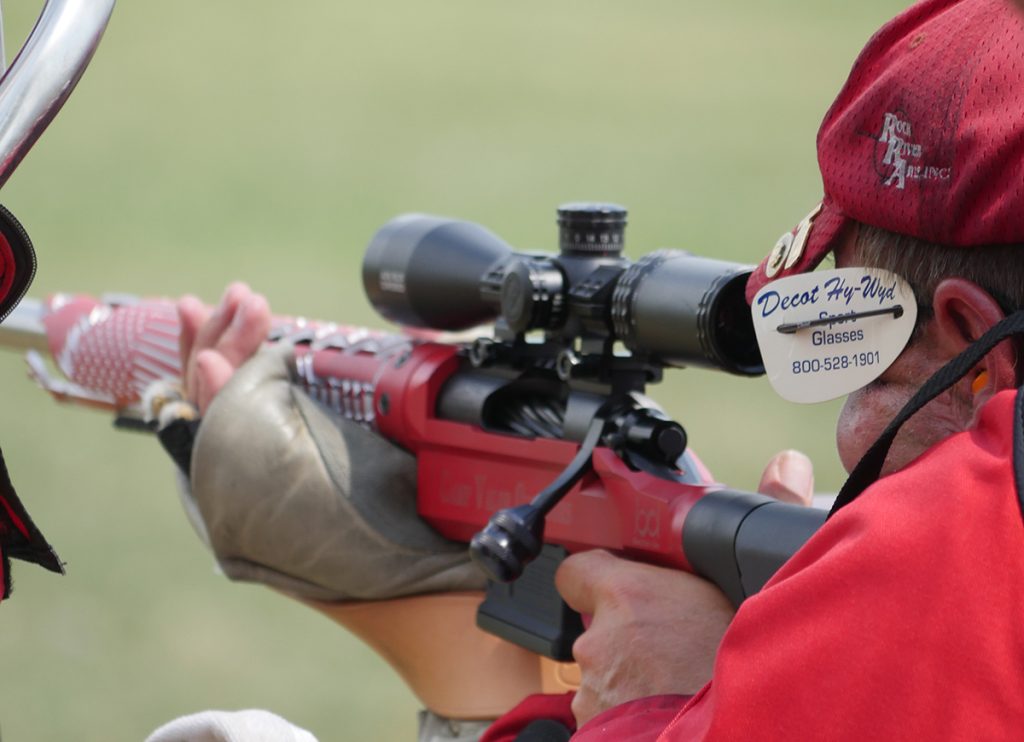 CMP long range events are once again being held at Camp Perry in 2019. Juniors are encouraged to participate! 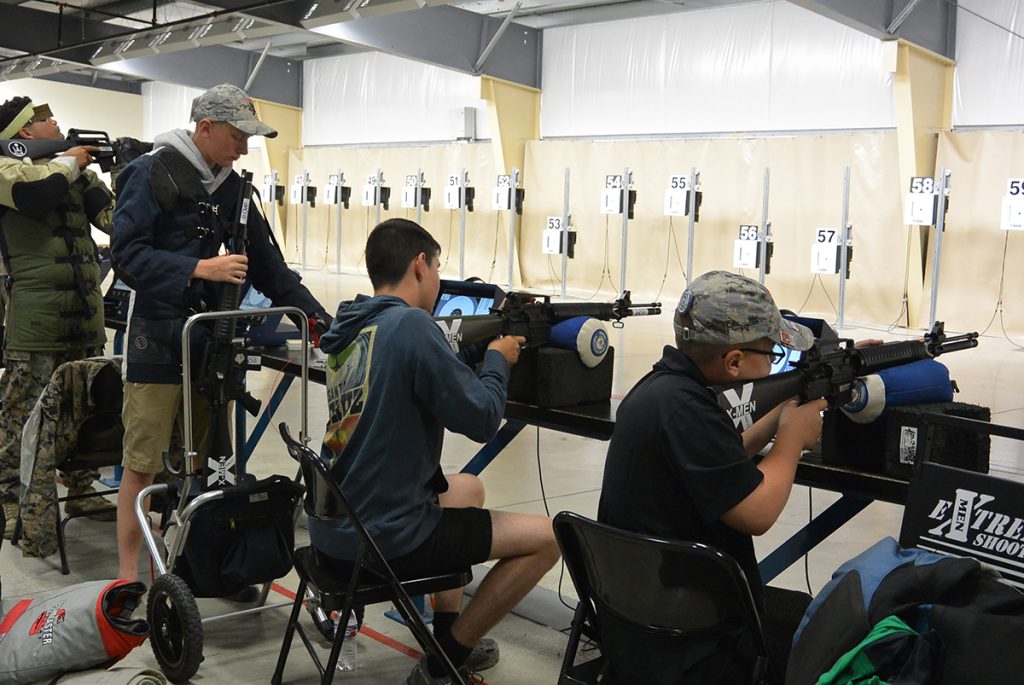 Commercial Row is a staple at the Camp Perry National Matches. Competitors can leisurely stroll down the row of shops vendors set up for each stage of the National Matches. These shops contain nearly anything you may find yourself needing at the matches, along with Creedmoor’s store inside the CMP headquarters. Powder, bullets, gloves, coats, ear and eye protection and, of course, rifles – it is easy for shooters to find everything they need to get started. The wonderful thing about Commercial Row is that some vendors offer Camp Perry only discounts, particularly to junior shooters to help them get started with their own equipment at a more affordable cost.

There are many opportunities available for juniors as well as families at the CMP National Matches. There are also CMP Travel Games held across the country and support available for juniors attending the National Matches. Many competitors will do anything to help a junior and many will lend equipment to those who need it. At the heart of the matches is a love of the Second Amendment and a passion for marksmanship – it is an experience like no other that brings people together from around the world.

View the 2019 National Match program, schedule of events and registration information at http://thecmp.org/competitions/cmp-national-matches/. We hope to see you on the firing line at Camp Perry!