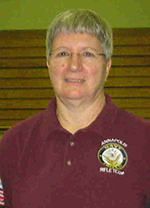 Norris Diefenderfer, 85, came to the sport of rifle indirectly in May of 1973 when the leader of the Washington County, Maryland, 4-H rifle club became ill and was unable to find a replacement. Norris stepped in to fill the role – learning on the job and even going as far as to attend a shooting sports coaching clinic at the Olympic Training Center in Colorado. Over the years, he was also lucky enough to have had various valuable assistant coaches who helped him run the club, gaining experience from one another along the way.

Initially, the 4-H rifle club only met through the summer months, with their season culminating at the annual 4-H rifle match. As time passed, Norris became interested in getting his juniors involved in additional matches. He acquired the ability to use the nearby Chambersburg Rod and Gun Club range in Pennsylvania and held weekly practices, alternating between smallbore and air rifle. Once a month, the young athletes would shoot a college-format match consisting of a course of fire of 60-shot 3P (three position) smallbore along with 60-shot standing air rifle.

During the summer months Norris moved his practices to the North American Rod and Gun Club in Hagerstown, Maryland, for outdoor shooting at 50 yards – maintaining a personal philosophy that shooting outdoors helped make for better indoor results. Norris brought his first group of juniors to the National Matches at Camp Perry in 1982, which created a tradition that has continued since.

Upon his retirement from employment in 1996, Norris renamed the club the Antietam Junior Rifle Club. His junior athletes began traveling to several matches outside of their club like the state Junior Olympic Rifle Competition (JORC), the National Rifle Association (NRA) sectionals, the Palmyra Invitational and some open collegiate matches. Norris held week-long summer camps at the North American Rod and Gun Club, instructing shooters and coaches in the training of young athletes. The Antietam Club also began hosting the Maryland JORC and NRA Sectional matches at the Naval Academy in Annapolis.

This summer at the 2021 National Matches at Camp Perry, after 48 years of coaching, Norris decided to retire. He leaves a legacy of dedication to hundreds of young athletes, including 77 who have gone on to receive Division 1 college shooting scholarships. These scholarships total in the millions of dollars and have made education possible for a number of individuals who may not have attended college without them – a point of which Norris is particularly proud. Several of his athletes have also gone on to All-American honors at the collegiate level.

His teaching methods have been passed down to many other coaches whose children have come through his program. He stresses shooting positions that are fundamentally sound and safe for the juniors, avoiding the all-too-often occurring back and spine issues that can occur from poor training. His sense of humor and warm, encouraging demeanor with his athletes will be greatly missed. Thank you, Norris, for bestowing your incredible knowledge to future generations and allowing excellence to continue within the sport.

Find out more on the Antietam Junior Rifle Club at https://www.youthshootingsa.com/product/antietam-junior-rifle-club/.

If you’d like to find your local club, visit the CMP Competition Tracker Page at https://ct.thecmp.org/app/v1/index.php?do=clubSearch to become involved.

Have an article to share or want to highlight your CMP Affiliated Club?  Send us your photos, reports and articles to highlight in The First Shot – email [email protected]. We look forward to hearing from you.

A Note from the CMP: At the CMP, we are not only dedicated to an increasing number of those involved in marksmanship within our own programs but are also devoted to supporting the efforts of those who are creating their own legacies in their own ways. Our Club News articles are our way of displaying the successes of our clubs, in the hopes of encouraging others to take the same respectable paths – both in marksmanship and in life. We are proud of our clubs for all of their endeavors and are honored to show them off within our news feed.

The Baltimore County Game & Fish Protective Association (BCGF) recently marked its 20th year as a Civilian Marksmanship Program (CMP) Affiliated Club. For their milestone and continued support, the CMP presented the club with a 20 Year banner to display at their home range.

The BCGF was founded in 1936, with land was set aside for a wildlife habitat. Located in Baltimore, Maryland, the club is equipped with a 50-, 100- and 200-yard rifle range, seven-position 15- and 25-yard pistol ranges and three trap houses. Currently, the club holds 594 members.

Activities held at the BCGF include Monthly Military Rifle matches, using vintage military and AR-style rifles at 50, 100 and 200 yards. Bowling Pin, Bullseye Leagues and metal plates are also offered on both the rifle and pistol ranges along with precision .22 shoots. The club also sponsors a few area Boy Scout Troops and have weekly .22 youth shoots. Additionally, the group sponsors an all-day fish rodeo for the kids and support many community projects on club property.

To learn more about the BCGF, visit the club website at www.bcgf.org.

CMP Affiliated Clubs from across the country are allowed the unique opportunity to host CMP matches, training courses and several other valuable benefits. Clubs interested in becoming affiliated may review the proper steps and qualifications on the CMP’s “Become Affiliated” page at https://thecmp.org/clubs/affiliate/.

Follow this page for the latest updates and news in the state of Maryland.

Follow this page for the latest updates and news in the state of Maine.