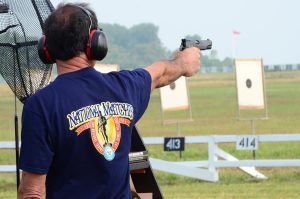 Both experienced and beginning pistol shooters can find a variety of opportunities to shoot in local, regional and national competitions. Many local clubs have regular weekly or monthly matches, while the CMP offers matches and learning opportunities throughout the year. If you’re seeking a pistol competition and you’re not currently a member of a CMP-affiliated club, you can find a local club by browsing the club affiliation link.

If you’re new to service pistol and have an interest in competitive shooting, a great place to start is the Pistol Small Arms Firing School (SAFS), sponsored by CMP and the U.S. Army Marksmanship Unit. The school is conducted at Camp Perry each summer and led by some of the top marksmen in the country. Participants can learn about pistol components, safety and even have the opportunity to fire in a true EIC match! Click on this link to learn more.

When a civilian competitor earns his or her first EIC “leg” points, whether it is 6, 8 or 10 points, they will be awarded a bronze EIC badge. Twenty points earns a silver badge, while 30 credit points grants a civilian his or her Distinguished Badge. At least one of the “legs” must be an 8 or 10 point leg.

Whether you’re a civilian or military shooter, the opportunity to reach the championship level is available to all shooters. After results from sanctioned EIC Pistol matches are received at CMP, scores are inputted into our Competitions Tracker system. This gives us the ability to post the top 100 EIC Pistol Match scores.