In 2011 and 2012 The CMP sold a large quantity of Garand cartridge belts. They are Cold War era Greek military belts that are a close copy of the U.S. M-1910 cartridge belt used in both World Wars. Mr. Michaels asked me to post some information comparing the Greek belts to the U.S. Military belts. Images shown courtesy of http://www.popernack.com.

During the M1 Garand’s service life there were two main cartridge belts in infantry use:

The M-1910 Infantry Belt was produced from 1911 to 1920 and had ten pockets to carry 100 cartridges on five round stripper clips for the M1903 or M1917 Rifles. There were many minor variations of pocket snap types and fabric construction. These belts continued in service through WWII and would also hold 80 .30 caliber cartridges on eight round Garand clips.

The M-1923 Dismounted Belt retained most of the features of the late WWI era M-1910 belts and added an improved buckle (easier to use), and improved size adjustment mechanism (cheaper to produce). Few if any were produced prior to 1941, but they continued in production until about 1960.

There are other similar contemporary belts for Cavalry or Mounted use, as well as some experimental versions, but that is a topic for another day. Here are a few comparison pictures of M-1910, M-1923, and the Greek belts. 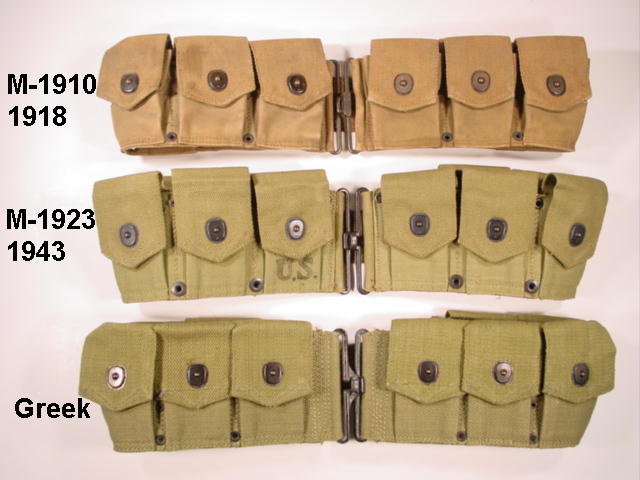 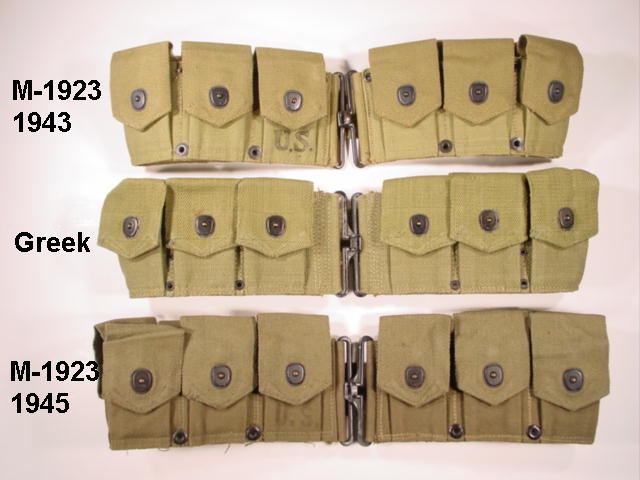 2. Front view comparison of 1943 and 1945 dated M-1923 Dismounted belts and the Greek belt. Notice the U.S. markings not on the Greek belt and also the use of “pot metal” zinc alloy buckles on the 1945 and Greek belts rather than the brass buckle on the 1943 belt. 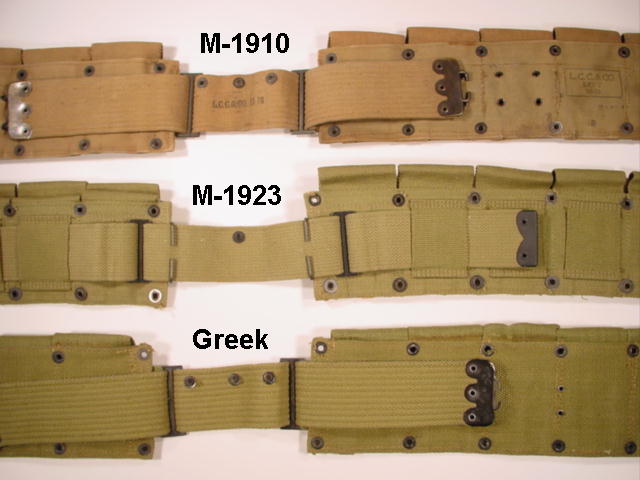 3. The main difference between a M-1910 and a M-1923 belt is the size adjustment mechanism at the back. The M-1910 uses a wire hook and grommets and the M-1923 relies just on friction between the webbing and buckles. 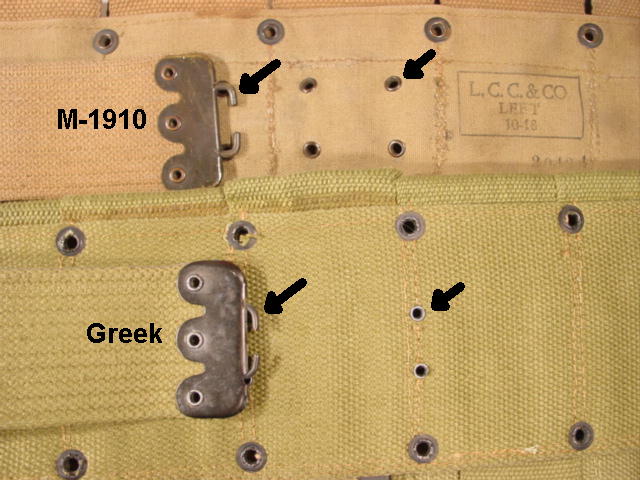 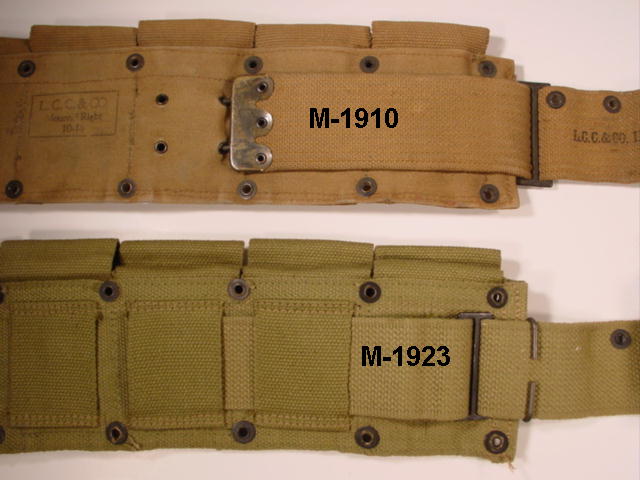 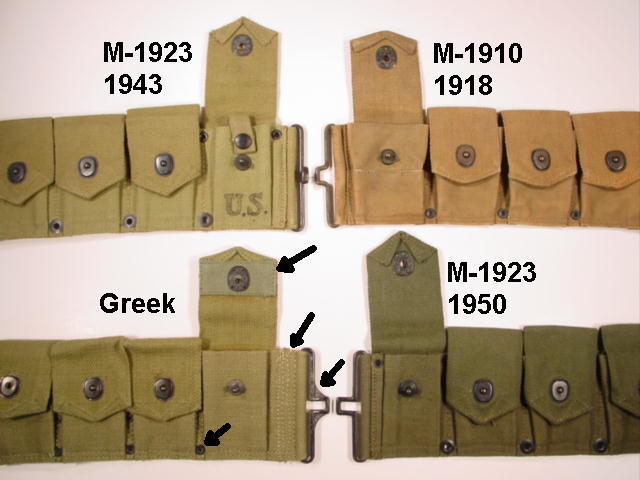 6. Comparison of the 1918 dated M-1910, 1943 dated M-1923, 1950 dated M-1923, and Greek belts. Each pocket held two five round stripper clips or one eight round Garand clip. Note the small strap and snap in the 1943 belt’s pocket. Early M-1910 and WWII era M-1923 belts used this strap to secure one of the two five round stripper clips. Late WWI M-1910 and Post-WWII Army contract M-1923s deleted the strap. Post-WWII USMC contracted M-1923s retained the divider strap until the end of production. Also note the zinc alloy buckle used on the 1945 and Greek belts. U.S. belts used this rather than brass as a wartime economy measure, but returned to brass hardware in the 1950s. Finally note the differences in grommet size and placement between the different belts (see arrows) and also the added reenforcement fabric on the Greek belts flaps. The Greek belt is a close copy of the M-1910 design, but has some unusual features like pocket flap reenforcement and also the reversed positioning of the buckle. The male portion of the buckle is on the right side of U.S. belts and the left of the Greek belt.

It is curious the Greeks copied the older cartridge belt design, since the last M-1910 was produced in 1920. Possibly they recieved some obsolete M-1910 belts along with the M1903 rifles we provided as military assistance in the late 1940s.

Altogether the Greek belt is both an interesting Cold War era collectable and a quality belt that could serve reenactors or recreational shooters well.