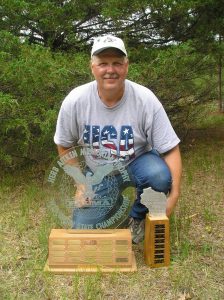 I hold a High Master Classification in NRA High Power NMC, Mid-Range and Long Range. I hold an Expert Classification in 3-position smallbore and smallbore prone. This is my 23rd year coaching the MRC Sportsmen’s Club Junior Marksmanship Program. In High Power Rifle competition, I was the 1992 National Long Range Champion. I have been the NMC State Champion 13 times, a three-time State Long Range Champion and a 16-time High Power Regional Champion. I am a four-time Mid State Indoor Pistol League Champion in .22 Cal. I was a member of the 2007 USA Palma Team and a member of the winning Long Range (Palma) Veterans Team at the 2015 World Championships.

My wife Jackie and I have been married for 13 years and have two energetic grandsons, Oliver and Eli. My wife and I are big Green Bay Packers fans. I like to hunt deer and small game. My business (Accuracy Unlimited) is building competition rifles and making rifle barrels.

I want to help promote Youth Marksmanship training. I would also like to improve the quality of coaching and shooting experiences for young shooters in the state of Wisconsin by using the CMP to bring more opportunities to both.

Emme Walrath, 15, of Kenosha, Wisconsin, has had an exciting year. A regular at the Civilian Marksmanship Program’s (CMP) Monthly Air Gun Matches, often shining in precision air rifle, she has progressed from local events to the national stage – maintaining outstanding scores and setting a reputation as a respectable contender in her stride.

In March 2021, Emme shot a score of 599-53X at the Indiana Junior Olympics – dropping only one point in the prone position. She also earned third overall in the 60 Shot Open Match at the Camp Perry Open in May as well as second amongst all juniors. Additionally, her Southport Xception junior team (Walrath and teammates Dylan Gregory and Anthony Hotko) claimed the third overall spot in the Open and Junior match.

“I enjoy the feeling of being able to shoot – it’s addicting,” she said.

Walrath admits that part of what she loves about the sport is the people she’s met along the way. Throughout her lifetime, she’s been involved in several different activities like piano, swimming, fencing and violin. She’s enjoyed them all, but for Walrath, shooting seemed to have the best support system and a community of remarkable people who she has become friends with through her travels. She now sees herself as an ambassador of sorts and is happy to spread the positivity that can come with marksmanship.

“For people who have never heard of the sport before, explaining it to them is fun,” she said. “Hopefully I can help grow the sport a bit too.”

Walrath offers encouragement to curious juniors looking to join, suggesting, “Definitely try it out. You might find it really fun! It’s not like other sports, and it’s an experience that I think most people should try.”

She began her own career when she was in middle school. Her parents decided that they wanted her to learn gun safety and shooting and soon got Walrath involved with pistol at the local Southport Gun Club in Kenosha.

“But, I didn’t really like it all that much,” she confessed.

Walrath soon learned the club also had a junior rifle program. She gave it a try, and as it turned out, she liked rifles a lot more than pistols. Jon Speck, the coach at the club, started training her on three-position smallbore rifle and eventually introduced her to air rifle. Naturally, he has grown to be an important mentor in her marksmanship journey.

“He’s always been with me since the very beginning, like my parents,” she said of Speck. “No matter what, he’s been there for me and helped me so much in this sport. Without him, I don’t think I could ever have been where I am today.”

Walrath practices several times a week, either in her coach’s basement or at the local range. Sometimes she connects with the club’s junior team, the Southport Xception, and other times she competes as an individual. She’s also a member of Grand Rapids Rifle and Pistol Club in nearby Michigan.

As with Speck, Walrath credits Grand Rapids Coach Cameron Zwart for helping her move on to and excel at national-level competitions.

“He has opened my view of shooting world,” she said.

Other advanced matches Walrath experienced in 2021 include the National Junior Olympic Three-Position Air Rifle Championships, fired in Ohio and Alabama in July. During the event, Walrath provided guests at the Camp Perry Gary Anderson CMP Competition Center a thrilling view into the fierce competition of junior marksmanship as she forced a shoot off in the concluding elimination final. With one shot left, Walrath fired the higher score to nab the win. She returned the following day to overtake the CMP Three-Position final as well. When it was all over, Walrath left with a 7th-place overall finish in the Junior Olympic match and 5th overall in the CMP event.

Outside of being awarded for her achievements on the firing line during her National Three-Position showing, she was also formally pinned the Junior Distinguished Air Rifle Badge she had earned a few months earlier in February.

She stuck around Camp Perry in July to attend her first National Smallbore Matches. Competing against some of the most talented marksmen in the country, Walrath managed to reach third overall in the Junior 3×40 Iron Sight Match – once again proving her abilities on a national platform.

“It may get tough at times, but you always have to keep the right mindset and trust the process,” she said.

With apparent success in her process over the last year, Walrath will focus on maintaining her scores, hoping to someday break the 630.0 mark.

“That means getting my hold consistent and a lot tighter,” she said.

Of course, Walrath recognizes that she wouldn’t be able to make any competition, whether in Ohio, Alabama or anywhere else, without the help of her parents. Her mom, Fawng, and her dad, Shawn, have championed her fully since she began and have helped lead her along her career.

“My parents, have always been on my side,” she said. “They were the first to support my continuation into the rifle marksmanship sport.”

She also admits that they, along with her coaches and friends, keep her driven in her quest for progress.

“The self-satisfaction that comes from improvement is very motivating,” she said.

Now accustomed to national matches, Walrath is looking to one day move even further by competing collegiately for a NCAA rifle team and, eventually, traveling to international matches – including that ultimate stage, the Olympic Games.

Follow this page for the latest updates and news in the state of Wisconsin.