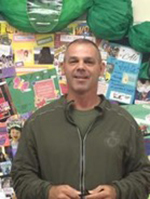 - Married August of 2017 to a wonderful woman...Maureen. - Has five children, one in San Diego, one in D.C. in the Air Force, 2 in college at New Mexico State University and one a sophomore at Eldorado High School. - Enjoys coaching marksmanship and the occasional round of golf.

To continue to lead the effort as making New Mexico one of the top states for junior shooting.

My main goal is to continue the legacy that Major Bill Barker created here in New Mexico and all across the United States. I want to continue to grow the sport in any way I can and support all teams who are interested in establishing a shooting program which benefits our junior shooters.

To promote shooting sports and the CMP

Follow this page for the latest updates and news in the state of New Mexico.

Follow this page for the latest updates and news in the state of New Mexico.