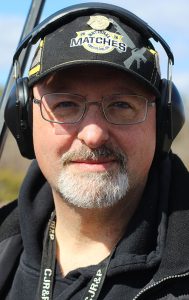 In over 20+ years of competitive shooting, nothing has challenged me more than getting introduced to competitive Precision Pistol shooting. Grinding through years of achievement led me to an opportunity to coach our local NJ Juniors and then, as of 2014, becoming the head coach of the New Jersey Junior Pistol Team, helping lead them to victory at the national championships three years running.

I live for the junior programs we can create and expand on those already existing. There is also great need for more junior pistol events with the CMP to match what is available with rifle.

Fingers crossed for the new junior state team air pistol team we just put together! It’s also important to me that we continue to promote friendly competitions between state juniors and expand interest in the programs that are being developed.

Distinguished Badges are the highest individual award authorized by the U. S. Government for excellence in marksmanship competition. A program that has been around since the late 1800s, the realm of badge possibilities has grown from simply rifle and pistol to a range of other disciplines – each individual badge branded with a number specific to when its holder claimed it and held in high regard, especially the coveted Badge #1.

“The thing that I like about marksmanship is that it is very fair. It takes hard work and dedication,” Lange said. “The reward, at any level, is in achieving your own goals.”

His wife is Kathy Chatterton – a sponsored athlete, captain of the Les Baer Custom Pistol Team and Distinguished Pistol Shot with a High Master classification who also happens to hold several national and international titles and records.

“It’s an unfair advantage,” Lange joked of the pairing. “It was Kathy’s knowledge, wisdom, experience and 100 percent support that helped me to achieve my goals. Kathy also introduced me to a network national and international champions whose friendship and support has both encouraged and inspired me.”

Lange grew up hunting with his family. When he realized he had a knack for shooting, he joined a local club bullseye pistol league and began competing with a Ruger MK II. He went on to purchase a Colt Gold Cup and fired his first match in April 1998.

“In my first year of shooting, I shot a lot,” he said. “I shot three, sometimes four, leagues during the week and at least one match on the weekends.”

During that first year, he earned an Expert classification and went to Camp Perry for the experience with a goal of returning to Camp Perry as a Master in 1999.

“Both years it was suggested that I hold back and stay in the lower class until after Camp Perry,” he explained. “I never did hold back, and I was proud to shoot with the Masters in 1999. Even though I was shooting scores at the bottom of the higher classification, I believe it made me a better shooter.”

“Shooting against better shooters caused me to work harder and improve faster,” he added.

When Lange began to learn more about competitive shooting, he realized dry firing aided in improving his scores just as much as live firing. He combined each with mental training learned from Lanny Bassham’s “Mental Management System,” and his scores rose to the High Master Class and above 2650 (his first time in May 2002 after having reached 2600 less than a year before).

“Shooting as many Regionals and State Championships as possible helped me to become more comfortable at bigger matches,” he said. “At first, I just shot in the six or seven nearby states. Eventually, I was shooting Regionals from Florida to Maine and as far west as Phoenix. I shot at matches where I didn’t know anyone, and no one knew me. Shooting in a strange place far from home is a great way to gain match experience.”

From 2003 to 2006, he was a member of Team UltraDot before joining Springfield Armory in 2007. He also began shooting revolver in June 2006 and became the seventh person to receive the NRA Distinguished Revolver award.

In 2009, he competed on the Mountain Competition Pistol Team with Aimpoint, Atlanta Arms and Ammo and KKM Barrels as supporting sponsors. The following year, he joined his current team, Zero Bullet Company’s bullseye pistol team, sponsored by the Zero Bullet Company and Lapua.

“I have had the good fortune of shooting on teams with some of the best and most famous shooters in the country,” he said. “I am proud to be a member of the Zero Bullet Company team and owe much of my success to the bullets and ammunition from the sponsored companies.”

Lange’s also the vice president of the Riverdale Police Pistol Club and an officer and range trustee in the Association of NJ Rifle and Pistol Clubs (ANJRPC), the NJ NRA state rifle and pistol association.

“Some of these sponsors are not giant companies and spend much of their marketing budget supporting shooters through teams, picnics, prizes and donations,” he explained. “I hope that all competitors will support the shooting industry companies that give something back to our sport.”

He went on, “Please also remember that sponsored shooters are not professional shooters, and their support is limited. The real reward is in the glory and achievement that comes from working hard and being part of a team. I encourage all shooters to participate in team matches and seek out new sponsors. I believe the mutual support and involvement will help to strengthen this sport. The possibility of being on highly visible team is incentive for new shooters to improve and gives them an additional goal.”

Since his beginnings, he’s maintained the same lofty competition schedule. His location in New Jersey has allowed him to compete indoors in the winter and outdoors in the summer within an hour of his house – sometimes two matches within the same weekend, with others still available if he wanted to shoot more.

“My most intense training comes in the spring when I am on the range six days per week, practicing for Match Pistol, up until the Camp Perry matches in July,” he said. “My main focus on the range is rapid fire, while at home I dryfire and use mental training techniques like visualization and rehearsal.”

Even though pistol competition is his primary focus, Lange still participates in service rifle matches in the summer and trains offhand at an indoor range with a .22 upper in the winter. Admittedly, earning the Distinguished Rifleman Badge was his hardest to achieve. Lange also believes that the most elite shooters are the one who have earned the original three Distinguished Badges, Service Rifle, Service Pistol and International.

“I enjoy shooting service rifle with my wife and friends and helping them to achieve their goals of becoming Service Rifle Distinguished,” he said.

His advice to other athletes looking to obtain their own marksmanship objectives?

Next on Lange’s list is to reach a score of 2670. It’s an ambition he’s held for a long time, having gotten as close as 2666 three different times. No matter where his career leads him, Lange will forever be rooted in history – paving the way for fellow marksmen and women, one badge at a time.

“I have done these things far from alone,” he said. “Almost all of my friends are shooters, and this great sport is filled with great people.”

About the Distinguished Badge Program:

To earn a Distinguished Badge, a competitor must earn 30 Excellence-In-Competition (EIC) points or more in a qualifying competition. Individuals earn the 4, 6, 8 or 10 “leg” points based on score and a percentage of match participation, with at least one “hard” leg, worth 8 or 10 points. Learn more about the Distinguished Badge Program and how to earn one (or several!) on the CMP website at https://thecmp.org/competitions/distinguishedbadges/.

Follow this page for the latest updates and news in the state of New Jersey.