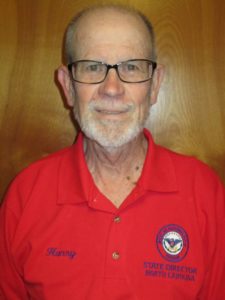 I became a Level 1 Rifle Coach in 2013, I was appointed as North Carolina CMP State Director, February 2015.

I am married to my wife, Judy. I have five daughters, eight grandchildren, and three great-grandchildren. I am also a freelance photographer. I shoot sports action photography, and I do wildlife and nature photography. I enjoy Air Rifle and Pistol Shooting, Archery, and I also enjoy hunting and fishing.

I want to expand and promote shooting sports and opportunities in North Carolina. I would like to improve junior shooting sports opportunities in the state and encourage these competitors to pursue national competition. I got involved in shooting sports because I remember when I was a Boy Scout at the age of 14 years old, and how the local sheriff\'s department taught me about gun safety and marksmanship. I believe in a gun safety, education, and marksmanship program that provides the elements of: Safety, Education, Enjoyment, and Competition. Our youth of today are not being taught these skills or what the Second Amendment means. As senior adults, it is our job to teach young people what it is all about and what our Founding Fathers believed in.

My goal is to teach our youth and my State that Marksmanship is a proud part of our American heritage, culture, sports and recreation. I want to teach and train our young people a gun safety, education, and marksmanship program that provides the elements of: Safety, Education, Enjoyment, and Competition. My goal is to get more youth involved at a competitive level, whether it’s “fun” or “serious.” I’d also like to help build more opportunities for shooting and bring shooting back to the mainstream – where everyone wants to learn to shoot. Nothing is more rewarding than working with our youth and teaching them – not just to shoot safely, but the values of shooting – and to be a part of a program whose mission is to accomplish that in this day and age is remarkable! My goal is to get more junior clubs started in North Carolina. My goal is to get clubs to join and affiliate with CMP and present advantages of being a CMP club.

The annual Eastern Games was held April 22 to May 1 at Camp Butner in North Carolina, with over 400 participants firing in the variety of vintage, modern military, highpower rifle and pistol opportunities offered on the schedule. Designed to provide unique challenges to a wide spectrum of guests, the event is filled with recreational-style competitions and educational courses that are suitable for new and experienced enthusiasts.

Recognitions and awards for individual accomplishments, such as for Overall, High Woman, High Senior and High Junior competitors, are part of the CMP mission and are featured at each competitive event held throughout the year.

William Trowell, 58, of Raleigh, North Carolina, claimed the overall win in the As-Issued 1911 Pistol Match and commented on his positive experience during the 2022 Eastern Games, thanks to the CMP staff members’ commitment to the sport and to the comfort of those in attendance.

“I saw that the CMP Support Staff was passionate in supporting the program and the shooters,” he said. “Even us little shooters – to get the achievement medals in a ceremony is a big morale booster.”

Trowell, who has been attending the Eastern Games since 2013, also earned the high non-distinguished honor and second place overall in the .22 Rimfire Pistol EIC Match.

Winning the .22 competition was Jonathan Shue, 40, of Liberty, North Carolina. Shue went on to lead the Service Pistol EIC match, guiding him to the title of Overall Individual Pistol competitor of the Eastern Games event for his consistent outstanding scores.

Offered for the second year at Eastern Games was a series of pistol aggregate matches to further challenge competitors on the firing line. Overtaking the Match Pistol 2700 Aggregate, an accumulation of scores fired in the .22, .45 and Center Fire 900 Aggregates, was, again, Shue, after collecting all three 900 Aggregate wins and earning an overall score of 2628-125X.

In rifle, last year’s Garand Match winner, Brian Williams, 48, of Granby, Massachusetts, returned in 2022 to claim the overall win in the event as well as overall wins in the Modern Military and Carbine competitions.

Also marking a new Eastern Games Record was Keith Schachle, 63, of Jasper, Georgia, who fired a score of 293-10X in the Vintage match – surpassing his own 2017 record by one point.

SFC Brandon Green, 37, a member of the U.S. Army Marksmanship Unit (USAMU), went on to break the CMP 2400 Aggregate Overall Match Rifle record he had originally set in 2018 – collecting a 2022 score of 2390-115X. USAMU teammate SSG Ben Cleland, 29, claimed a record of his own in the EIC Service Rifle Match after reaching an incredible score of 499-25X. Cleland dropped only one point the entire match, during the prone slow portion, while cleaning the rest of the stages.

Daily highpower awards were also presented to the top civilian and military competitors in the Match and Service Rifle categories as well as to aggregate winners by slow and rapid fire stages. Find a complete list of results, including “High” categorical winners, on the CMP Competition Tracker page athttps://ct.thecmp.org/EasternGames22Results.

Other Notable Results of the 2022 Eastern Games & Highpower Matches:

Photos of the event are available for free download at https://cmp1.zenfolio.com/f620606501.

Don’t forget to mark your calendars for the 2023 Eastern CMP Games & CMP HP Rifle Matches! The event will be held April 28 through May 7 – back at Camp Butner. View a full schedule of events for the upcoming Eastern Games on the CMP website at https://thecmp.org/cmp-matches/eastern-cmp-games-cmp-hp-rifle-matches/.

About the CMP Games:

The Competition Games are regional competitions held around the country throughout the year, featuring CMP’s unique rifle and pistol outdoor matches. Recognized as staple events of the CMP schedule, the Games are centered around recreation-oriented competition and educational activities that are designed to accommodate experienced marksmen as well as those hoping to learn more about the sport. For more information, including a detailed glance into each Games event, visit the CMP website at https://thecmp.org/competitions/cmp-travel-games/.

Haley Robinson, 21, of Mill Spring, North Carolina, set not one, not two, but three new national records during the 2021 National Rifle Matches. The annual event was conducted by the Civilian Marksmanship Program (CMP) and held in August on the grounds of the historic Camp Perry National Guard Training Facility, where it has been set for over a century.

Robinson’s record performances began with the President’s Rifle event, where she fired a score of 395-15X to earn new High Junior and High Woman records – finishing seventh overall. She was also the only junior to appear in the 20-person shootoff that accompanies the President’s Match.

“The first day, I did pretty decent, and it just stuck,” she said of her President’s showing.

Back in 2018 (only her second trip to the National Matches) she gave herself an objective to reach the Top 20 shootoff. She inched close in 2019, reaching the President’s Hundred (as one of the Top 100 competitors) in 46th place overall and earning a coveted President’s Tab. She had hoped to climb her way into the shootoff the following year, but, with the cancellation of the 2020 National Matches, she wasn’t given the chance.

Along with her marksmanship abilities, Robinson is known for her composure on and off the firing line. She says she doesn’t know exactly how she stays so relaxed, but she has a hunch.

“My dad blames it on my low blood pressure,” she joked. “I’m just always calm.”

Robinson credits her dad, Bobby, for getting her started in marksmanship in 2016 (a year after he began his own journey within the sport). The following year, Robinson and her dad attended countless competitions and practiced whenever they could – talking with one another about nothing but shooting during their long truck rides from match to match. Robinson’s hard work paid off when she earned her Distinguished Rifleman Badge, a lifetime goal for most marksmen, that same year.

Now that she’s reached the President’s Shootoff, she’s got a new target in mind – winning the match.

After her success in the President’s Rifle Match, Robinson went on the next day to set a new Women’s Rifle Trophy national record score of 496-25X in the National Trophy Individual Match – finishing 10th overall out of a field of almost 800 competitors that included several decorated civilian and military athletes.

Seemingly arriving out of nowhere and covering the leaderboards, Robinson claims being a newcomer to the sport with a budding reputation can come with its own challenges.

“It’s very different, especially when people don’t know who you are,” she explained. “And it’s different being out here and being female, because they treat you a little different.”

She welcomes tips and advice, but to those who may underestimate her talents because of her age or her gender – she lets her scores do the talking.

“I don’t say anything to anybody,” she said. “I won’t even tell people my score, until they ask me. I’m very humble, and I don’t want to be THAT person.”

Besides that, she’s not out on the line, day after day, to prove anything to anyone else – she’s doing it all for herself.

As for her future plans in marksmanship, Robinson keeps it simple, saying, “Still shoot. Keep going.”

And coming back to the National Matches in 2022 to claim that President’s Rifle win?

View a complete list of results of this and other 2021 Camp Perry National Rifle Matches at https://ct.thecmp.org/21nmrifleresults.

Photos of this and other National Matches rifle events can be found and downloaded for free on the CMP’s Zenfolio page at https://cmp1.zenfolio.com/f641171691.

Follow this page for the latest updates and news in the state of North Carolina.