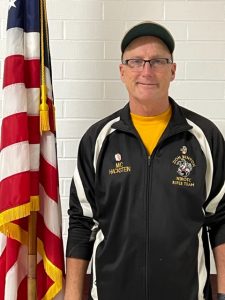 Single with 2 children, Ryan 38 and Melissa 37. I love hunting and fishing and will play any sport – you name it, I’ll play it.

In my 20 years of being a marksmanship coach at Zion-Benton Township High School, this has become a passion of mine. I’ve worked very hard to get to the level of where I am now. I coach and spend countless hours at Zion-Benton, practicing and taking my cadets to many competitions for these opportunities – many once in a lifetime. I want to pass on all the knowledge I’ve obtained to the coaches in my state, with the hope they’ll become better at what they do and get their teams more involved.

To do whatever I need to do to help our units in Illinois get more involved, obtain more equipment, participate in more competitions and to answer any questions they may have. Most importantly, to be there for them if they need anything. 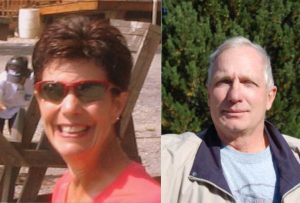 Talk of gun control regulations motivated my husband, Raymond, to purchase a pistol for us to learn to use in 1989. We learned quickly and found that others were interested in learning as well. A year later we were competing well and teaching basic pistol classes at a local range. Our interest expanded into various kinds of shooting but finally, what captured our interest and then our hearts, was Olympic or International rifle and pistol. We narrowed our focus, started a youth oriented club and never looked back.

We both began competitive shooting in pistol. I was later introduced to smallbore rifle and decided that was where my passion was focused while my husband shoots some smallbore rifle, his passion remained with pistol. I was competing at the national level when injured in a car accident and am no longer able to compete. We began to bring our rifle team to matches and found that we needed to grow as coaches just as they were growing as competitors in the sport. Prior to the CMP seeking individuals to help develop competitive marksmanship programs in their state, we were already doing that in Illinois. As members of the National Coach Development Staff, we hosted both Rifle and Pistol Coaches Schools, held coaching clinics and conducted the IL Competitive Rifle Camp. To do so with the help of the CMP just made our job easier and more enjoyable. The NRA Coaching Certification Courses gave us the tools to coach and experience has allowed us to grow over the years. Ray is a Level 3 Pistol Coach and I am a Level 3 Rifle Coach. We have attended many national coaches’ conferences to continue our education in our sport.

With what we were already doing, it was a natural progression to volunteer as the CMP Directors for Illinois when that program was initiated. The CMP has been great to work with as they are extremely supportive of our efforts in the field and listen to our ideas and needs while making every effort to implement those that are productive. It is an honor and privilege to serve and to work with great people.

Our goals are still the same: to give competitors the environment and opportunity to participate and excel in competitive marksmanship and to train coaches to understand how to help the competitor set and reach their goals and full potential in the sport.

Rachael Miller-Lansdown lives in Jenks, Okla. She began in highpower service rifle around nine years ago with her husband, Allen. Her first competition experience was at CMP’s Oklahoma Travel Games where she fired in the Garand/Springfield/Modern/Vintage Military (GSMM) matches. She has since collected several marksmanship achievement pins and even made the Congressional 30 at the Talladega 600 Match.

She currently oversees the CMP Highpower Across the Course Matches at nearby Red Castle Gun Club and has completed the first level of Range Officer certification.

“I really have a desire to see shooting sports continue to grow and to see women and more young people enter the shooting sports,” she said on becoming a CMP State Director.

“The Civilian Marksmanship Program has been such a welcoming community for me as a female athlete, from the beginnings, even with not having any previous knowledge concerning marksmanship shooting,” she went on. “CMP events and matches have also provided a sport that my husband and I can compete together. This is what we do together – shooting.”

Miller-Lansdown and Allen have been married almost 14 years. The couple share two bonus-children and a daughter-in-law. Outside of marksmanship, Miller-Lansdown loves the outdoors and outdoor activities, sports (especially football), travel, rodeo, cooking, cooking on my grill, old movies and reading.

“In my 20 years of being a marksmanship coach at Zion-Benton Township High School, this has become a passion of mine,” he said of marksmanship. “I’ve worked very hard to get to the level of where I am now. I coach and spend countless hours at Zion-Benton, practicing and taking my cadets to many competitions for these opportunities – many once in a lifetime.”

He continued, “I want to pass on all the knowledge I’ve obtained to the coaches in my state, with the hope they’ll become better at what they do and get their teams more involved.”

As a CMP State Director, Hackstein says he is ready to do whatever it takes to help units in Illinois get more involved, obtain more equipment, participate in more competitions and answer any questions they may have.

“Most importantly, be there for them if they need anything,” he added.

In his personal life, Hackstein has two children (Ryan, 38, and Melissa, 37), and loves hunting, fishing and playing any sport in existence.

Learn more about Rachael Miller-Lansdown and Master Chief Dan Hackstein as well as all the CMP State Directors through our website at https://thecmp.org/training-tech/state-director/.

CMP Instructs Over 50 Rifle, Pistol Students During Its Marksmanship 101 Courses in Illinois

Over the gorgeous weekend of Oct. 1-2, 2022, the Civilian Marksmanship Program (CMP) conducted its Marksmanship 101 Rifle and Pistol Courses at the Illinois State Rifle Association in Bonfield, IL.

“The Illinois State Rifle Association is a fantastic host, and they have told us we always are welcome there!” said Amy Cantu, CMP program & competitions associate who manages the Marksmanship 101 program.

Held around the country throughout the year, the October session included a Pistol Marksmanship 101 Course – the first of its type at the Illinois location. A group of 30 individuals attended the training, guided by CMP instructors Jim Henderson and Larry Grace.

In Rifle, 23 students were trained by instructors Danny Arnold and Dean Bates. The pair also led a Range Safety Officer course, which is helping improve safety enforcement on the range during CMP sponsored and sanctioned competitions, with 16 total attendees.

The CMP was also fortunate enough to utilize the assistance of talented U.S. Army Marksmanship Unit members who again provided exceptional hands-on instruction and valuable knowledge for participants in both the Rifle and Pistol Marksmanship 101 Courses during the Illinois trip.

The accompanying Excellence-In-Competition (EIC) rifle and pistol matches each saw two competitors earn introductory points (4 points each). The EIC points earned are applied to the total of 30 required to receive the Distinguished Rifleman badge – the highest individual award authorized by the U. S. Government for excellence in marksmanship competition. View results at https://ct.thecmp.org/app/v1/index.php?do=match&task=edit&tab=results&match=22445.

The next Marksmanship 101 Courses are set to be held Nov. 14 (Rifle) and Nov. 15 (Pistol) during the annual Talladega 600 event at the CMP’s Talladega Marksmanship Park in Alabama. The Talladega trainings will be the last of 2022 but will return in March at the Western CMP Games in Arizona.

The CMP’s Marksmanship 101 Courses are designed to train individuals on rifle or pistol essentials and competition basics in a closely monitored setting. Utilizing the talents of qualified CMP staff and world-class instructors, participants learn through classroom discussion and active training on the range. Near the conclusion of each course, students apply all they have learned in an official EIC match, fired under close supervision of the mentors on the line.

The courses are designed to accommodate those familiar with marksmanship as well as those completely new to the sport, so previous experience is not required. Rifles and ammunition are provided by the CMP. Shooter equipment is welcome, including jackets, gloves, a sling are encouraged at the event, while hearing and eye protection are required during live firing.

For more information on the Marksmanship 101 Classes or to register, visit the CMP website at https://thecmp.org/training-tech/marksmanship-101/. Questions on Marksmanship 101 may be directed to Amy Cantu at 419-635-2141, ext. 602, or [email protected].

In addition, my home range now  has 2 electronic targets for air rifle.  One can convert one to 50ft smallbore rifle.  As we train NCAA Collegiate athletes, having both is necessary,

Training on our electronic targets is open to advanced shooters both in air and smallbore for anyone in the state.  Contact me for more information at [email protected] 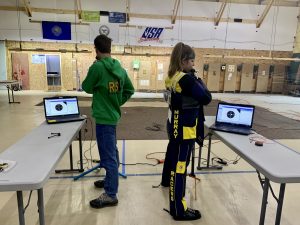 Welcome to the CMP for IL

Let me introduce my husband and myself:  I am Tina Odle and my husband is Raymond.  Together we represent the Civilian Marksmanship Program in IL.

We assist residents in the purchase of military firearms available through the CMP.