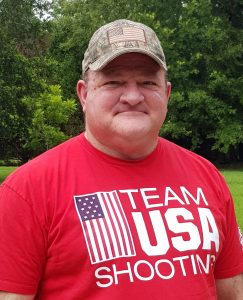 As a Senior Army JROTC Instructor for the past 22 years, I’ve coached 3-Position Air Rifle teams for 18 of those years. I’ve coached my teams to qualifying for the Army JROTC National Championships for five consecutive years and coached three athletes to qualifying for the American Legion Individual Championships at the Olympic Training Center in Colorado Springs, CO. We were the American Legion Louisiana State Champions for five consecutive years. Over the years, several of my teams and I attended CMP Air Rifle Summer Camps at the CMP Facility in Anniston, AL.

I’m married to my lovely wife of 42 years, Jacqueline, and we have three “grown” children (two girls/one boy) and four grandchildren (two girls/two boys, ranging in ages 5 to 13). I retired from the U.S. Army with 20 years active service as a Tank Officer. Since retirement from the Army, I’ve been a Senior Army JROTC Instructor at three different Louisiana schools for the past 21 years. I coached JROTC 3-P Air Rifle Teams for 18 of my 21 years as a JROTC Instructor. I am a member of the American Legion and the Knights of Columbus and am also a member of the Single Action Shooting Society, where I participate in Cowboy Action Shooting Matches.

I enjoy shooting, competition and watching others succeed and improve. Over the years as an Air Rifle Team Coach, I have accumulated a bit of experience and knowledge in the field of marksmanship and competing and would like to pass that on to the marksman of Louisiana. I enjoy helping young Americans make good memories of their youth and learning the lessons of competition gained from competing, including both winning and losing.

There’s room for much improvement in the number of individuals and teams in the area of individual participation in marksmanship activities and competition within the state of Louisiana. I hope to increase individual and team participation and competition within our state. My first goal is to establish communication with all of the high schools in LA that either have or want to have marksmanship teams and to assist them with achieving their goals. Secondly, I will strive to increase the number of shoulder-to-shoulder 3-P Air Rifle Matches within our state by coordinating with and assisting coaches to schedule, publicize and conduct those matches.

Follow this page for the latest updates and news in the state of Louisiana.