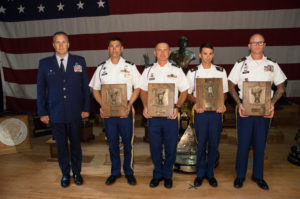 GENERAL INFORMATION: The National Trophy Pistol Team Match (NTT) is a National Trophy Match. It was first fired in 1920 when competition for the Gold Cup team trophy began. The Pistol NTT is a four-person team match with a requirement that at least one firing member must be a “new shooter.” (See Rule 4.9). Open, Civilian State or Club and Reserve Component teams are four-person teams. Law Enforcement teams are two-person teams. The Junior Pistol Team Match is also a two-person team match. 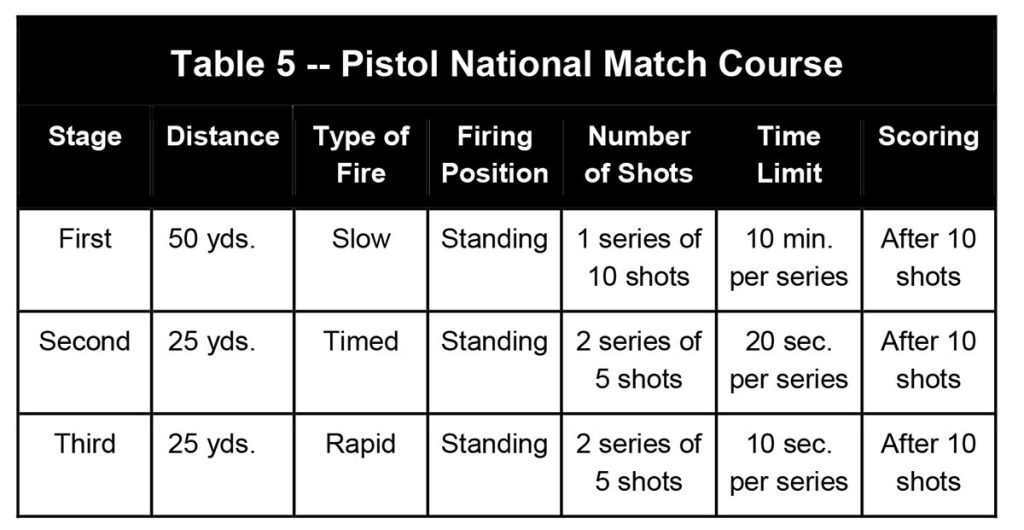 NATIONAL TROPHY TEAM MATCH ENTRIES: Entries in the National Trophy Team Matches must be made at the National Matches Welcome Center any time between scheduled pistol check-in. Scorecards and team squadding will be issued when team entries are made. Team entries close one hour before the start of the team match. Your team entry confirmation card with CMP competitor labels for the four team firing members (two members for Law Enforcement and Junior teams), coach and captain affixed to it, must be returned to the National Matches Welcome Center or CMP Headquarters no later than the start of the National Trophy Team Match preparation period.

OTHER RULES: Specific rules governing the conduct of the National Trophy Pistol Team Match are found in the CMP Pistol Competition Rules (see especially Rule 5.3). Junior competitors firing .22 Pistols only in the NTT Junior Pistol Match, the ready position for timed and rapid-fire stages is with the loaded pistol pointed down at a 45° angle. If the bench in front of the shooter is too high to allow a 45° angle ready position, the ready position is with the loaded pistol lowered as far as possible without contacting the bench (must not rest on the bench). (See CMP Rule 5.1.1).

AWARDS: The winning team in the National Trophy Team Match receives the Gold Cup Trophy (each team member, the team captain and the team coach, receive trophy plaques; the name of the winning team is permanently engraved on the trophy; the trophy is retained by the CMP on permanent display at Camp Perry). Special awards recognize these winning teams:

ENTRY FEES: $50.00 for Open, Club or State Association and Reserve Component teams; $25 for Law Enforcement teams; $15.00 for Junior teams. Team entries may not be made in advance, but must be made at the National Matches Welcome Center during the matches.