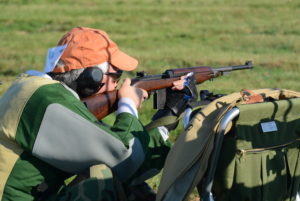 GENERAL INFORMATION: An M1 Carbine Match was fired during the National Matches in the early 1950s, but it was not fired between then and 2006.

COURSE OF FIRE: The M1 Carbine Course of Fire is used. All firing is at 100 yards on the SR-1 highpower rifle target (200 yard SR target reduced for firing at 100 yards). 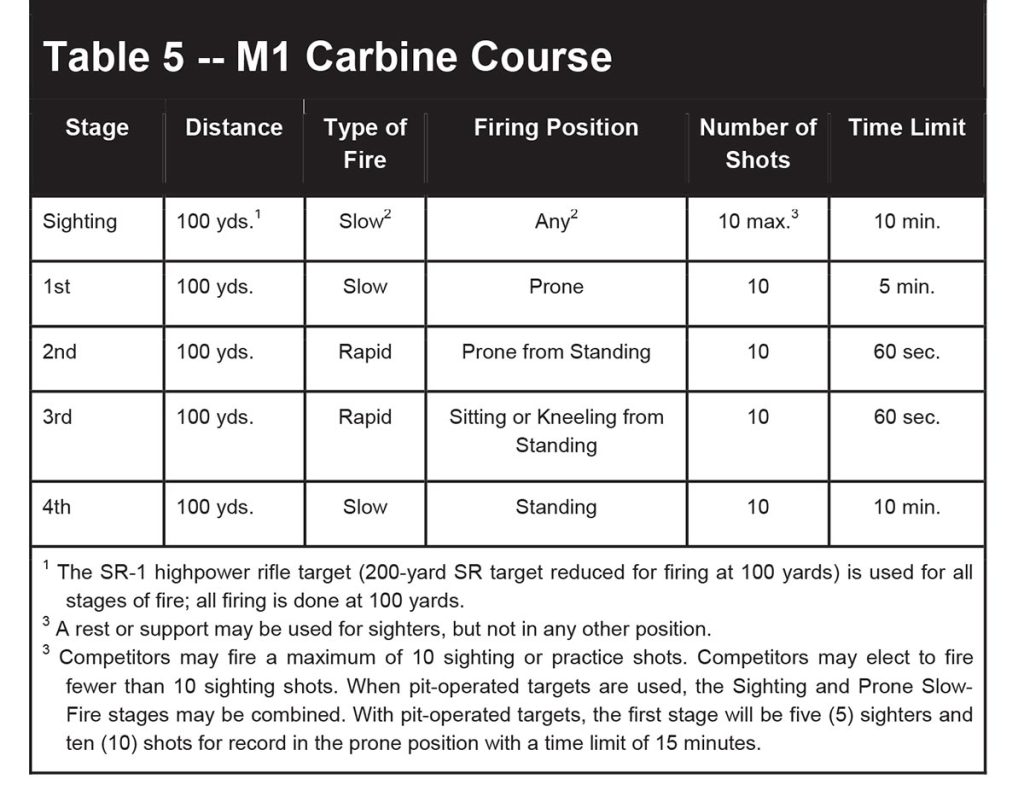 SQUADDING: The M1 Carbine Match is fired from the 300-yard line on Viale Range at targets that are placed 100 yards away. A maximum of 156 competitors can fire on each relay. Entries for a maximum of five relays will be accepted. The range capacity for this match is 780 competitors. The 5th relay will be for competitors in the NTT only and will start 30 minutes after the NTT Match. Relay assignments, scorecards and labels will be issued at the National Matches Welcome Center. This will make it possible for competitors to know when to report to the range for their competitor briefing and relay. Squadding tickets will be issued on the line. If you are sharing equipment with another competitor please make sure you sign up for different relays upon registration. If sharing equipment please come to the ticket table together to pick up your squadding tickets. You must have your competitor labels with you to pick up your squadding tickets. All competitors in this match will score for each other after each relay.

RIFLES: “As-issued” U. S. Military Carbines that comply with Competition Rules for CMP Games Rifle and Pistol Matches Rule 5.2.1 must be used. Carbines may have a sling that can be no longer than 48 inches from the lift-the-dot closure to the sling tip (see Rule 3.6.5). If a sling is attached, it may be used in the prone and sitting positions (hasty configuration only; no arm loops), but not the standing position. The sling must remain attached at both attachment points at all times. A separate category will be included for Commercial Carbines.

AMMUNITION: Competitors in this match must bring their own ammunition that complies with Rule 5.3.3. Hand loads may be fired. NO AMMUNITION WILL BE ISSUED FOR THIS MATCH.

OTHER RULES: Specific rules governing the conduct of the M1 Carbine Match are found in the Competition Rules for CMP Games Rifle and Pistol Matches (see especially Rule 5.6.1). Competitors who wish to compete in overall awards must follow Rule 3.7.9 (standing prior to rapid fire series). The M1 Carbine Match is a no alibi match; there are no re-fires for rifle or ammunition malfunctions. It is important that rifles and especially rifle chambers are clean and in good working condition so as to minimize the possibility of malfunctions or difficult cartridge extractions (often caused by rough or dirty chambers).