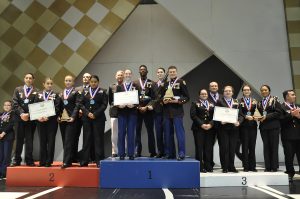 The JROTC National Air Rifle Championship is sponsored and conducted by the Civilian Marksmanship Program in cooperation with the Army, Marine Corps, Navy and Air Force JROTC Commands.  The championship began in 2003.  Teams consist of 4 members.  Each team member fires a 3x20 on consecutive days to make up the team score.  Individual scores are made up of two 3x20s.  Finals are fired for the top 8 shooters in each class on both competition days.  These scores are averaged to determine the final rankings.