Very few things are “one size fits all,” but the Rifle Small Arms Firing School (SAFS) comes close. An annual event conducted by the Civilian Marksmanship Program (CMP) and Army Marksmanship Unit (AMU), participants receive one-on-one instruction on how to safely handle and fire an AR-15. SAFS has something to offer those looking to shoot a rifle for the first time, improve their skills or for those more experienced competitors hunting their introductory Excellence-in-Competition (EIC) points.

The Small Arms Firing School attracts participants from all across the United States with various levels of firearm and competition experience.

The course is a full two days, with a classroom and live-fire portion on the first day, followed by the accompanying M16 Rifle EIC match on the second. Every SAFS begins with a safety brief and basic overview of the standing, sitting and prone positions. For repeat students and/or those with more rifle experience, there is an advanced class in which more in-depth concepts are discussed and individual questions are addressed by members of the AMU. While the advanced class is conducted, the rest of the SAFS class heads to the range for hands-on position training and dry-fire practice.

At the conclusion of practice, all students fire in a 40 shot M16 EIC Match at a chance to receive a score high enough to earn their EIC points.

Repeat match winner Nathan Russell of Emlenton, Pa., reclaimed his title from 2018 with a 394-14x. Eligible competitors who scored at or above 376-8x out of a total of 400 earned four introductory EIC points. 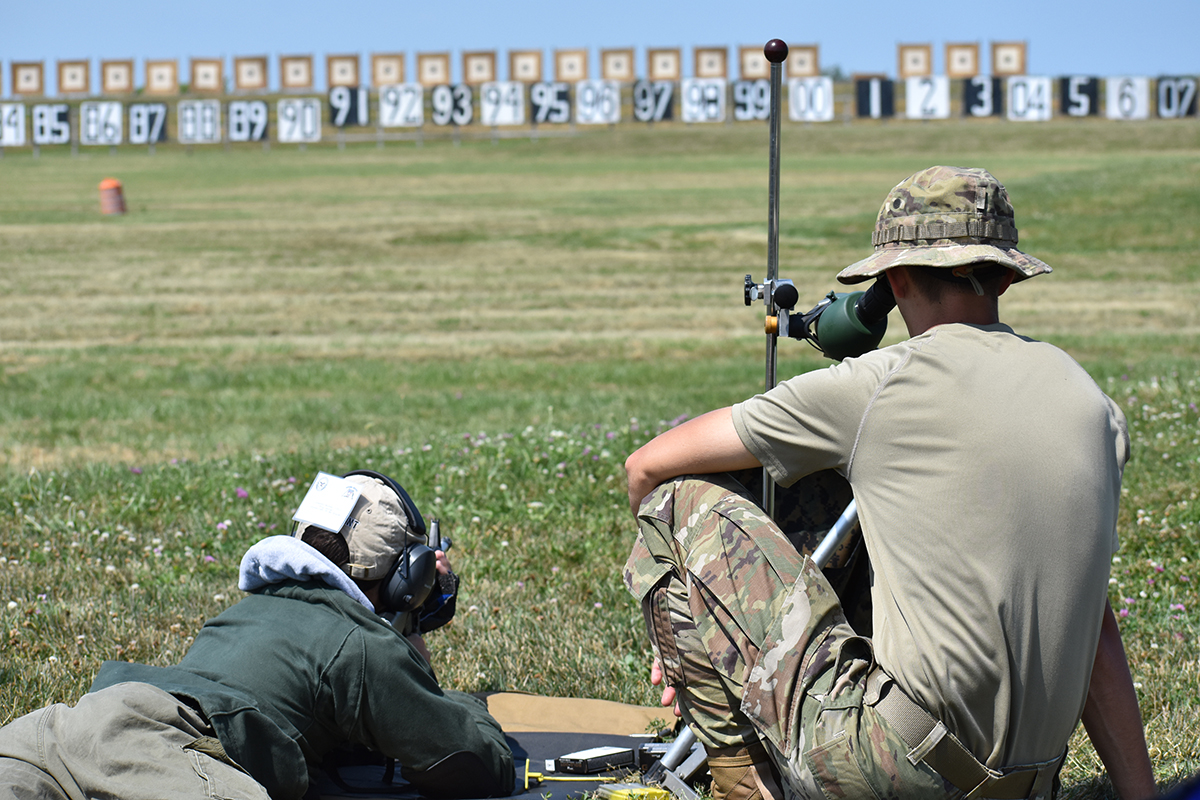 George Kerg and his coach Jedidiah Gaddie of the All Guard Marksmanship Team.

George Kerg, of Olmsted Falls, Ohio, had set a goal of earning four EIC points at the 2018 SAFS during his first visit to Camp Perry. After missing the cut last year, Kerg spent a lot of time practicing, hoping to earn points this year. His work paid off, with a score of 379-7x earning him 26th place overall as well as the EIC credit he was so hoping to earn. 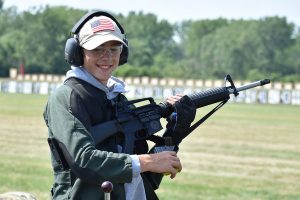 George Kerg smiles, waiting for the command to load before the sitting rapid-fire string of the M16 EIC match.

Kerg attributes some of his success to thoroughly rehearsing every shot in his head the night before the match. He recalls 2019 SAFS, saying, “Definitely an experience I will always remember. A lot of hard work both physically and mentally to get there, but it definitely paid off.”

Not everyone attending SAFS is seeking EIC points. Anthony Wilder of Nisula, Mich., found himself encouraged by a close friend to explore service rifle.

“After competing in bullseye pistol for the past five years at Camp Perry, I never knew what it was like to shoot in the rifle matches - standing at the 200-yard line with a rifle, waiting for the targets to rise and then dropping into position to shoot was really exciting.” Wilder plans to attend Rifle SAFS again in 2020 in addition to the pistol matches.

Katie Payne’s highpower journey began this year. An experienced hunter and competitive archer, she was a spectator during the CMP Cup Matches and with a little encouragement from her fiancé, Zachariah Walker, and coach, Jamey Williams, Payne made the trip from Helena, Mont., to Camp Perry for the SAFS.

She stated, “SAFS helped me immensely by answering questions about position refinement and wind reading/adjustment, two things I was still quite unfamiliar with.” 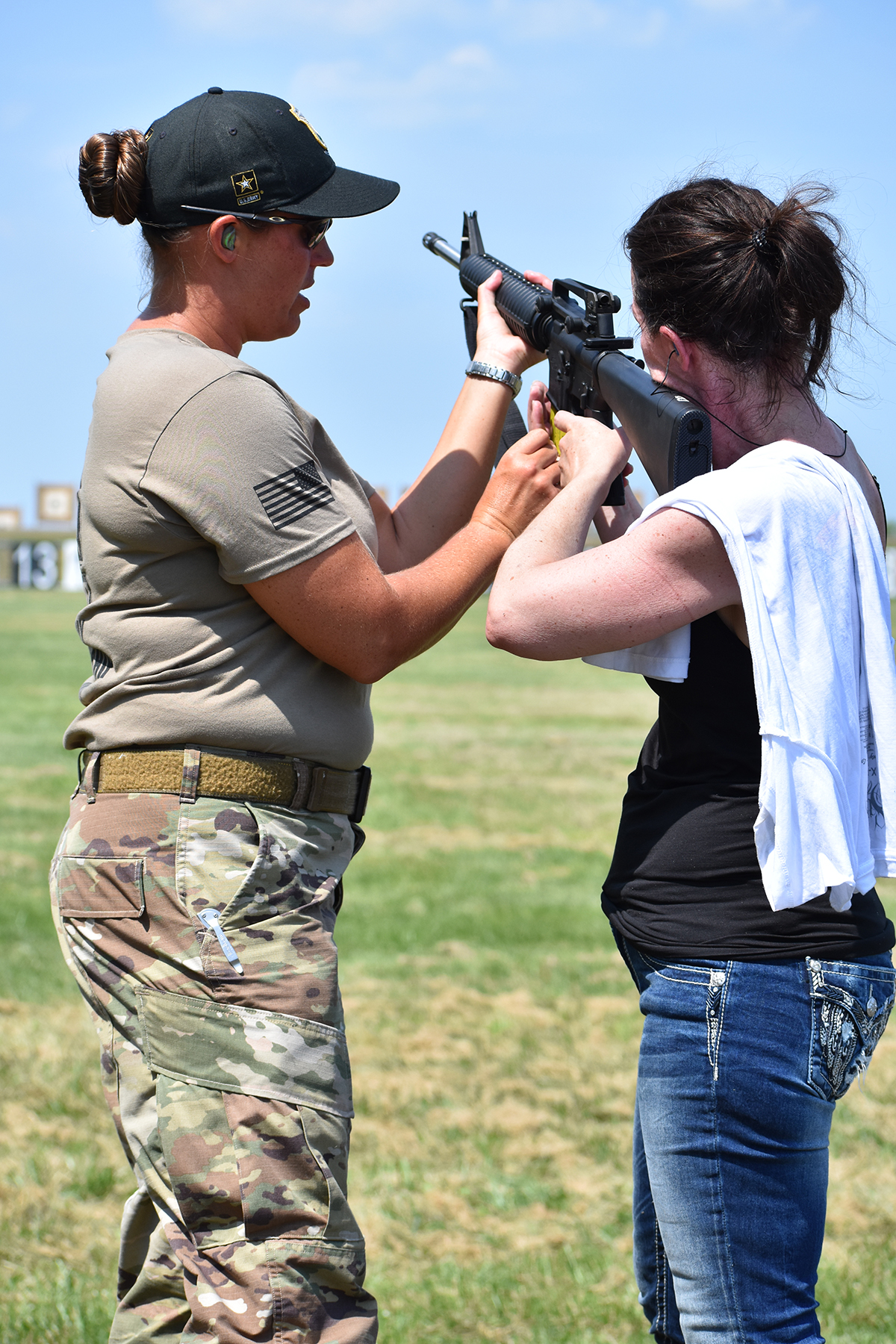 SSG Amanda Elsenboss of the AMU provides instruction on the standing position during 2019 SAFS.

Payne went on, “The best part of my experience at SAFS was definitely befriending and learning from an incredible female shooter from the Army Marksmanship Unit, Amanda Elsenboss. Amanda was kind but firm in correcting me on my positions and trigger control, and my groups grew a lot tighter through my time shooting with her.”

She describes Elsenboss as a role model and is excited to continue learning from her and from others across the highpower community. She also summarized her time at SAFS while encapsulating that of others.

“I grew a lot through SAFS as a marksman and look forward to applying the principles learned in practice at home. I overheard a few veteran shooters talking about how they’ve learned something new every time they’ve taken SAFS, and I believe it,” Payne said. “There is no limit to the growth and knowledge you can obtain.”

For more information on the CMP’s SAFS program, visit http://thecmp.org/training-tech/small-arms-firing-school-training/. 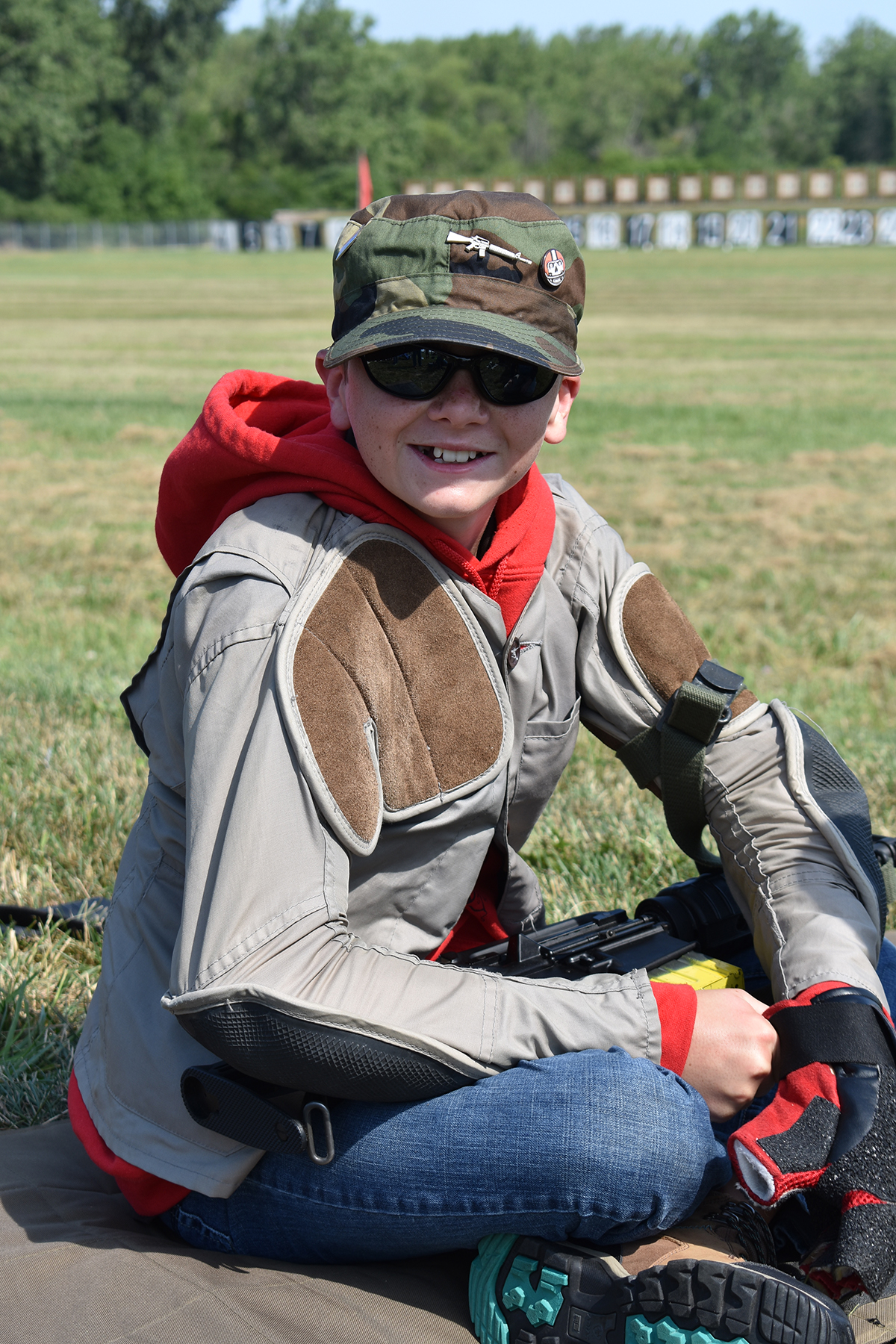 Colin Sarver has been eagerly awaiting his first chance to shoot SAFS. His grandfather Alan Wolff reported that while Colin enjoyed shooting, he really loved pulling targets in the pits. 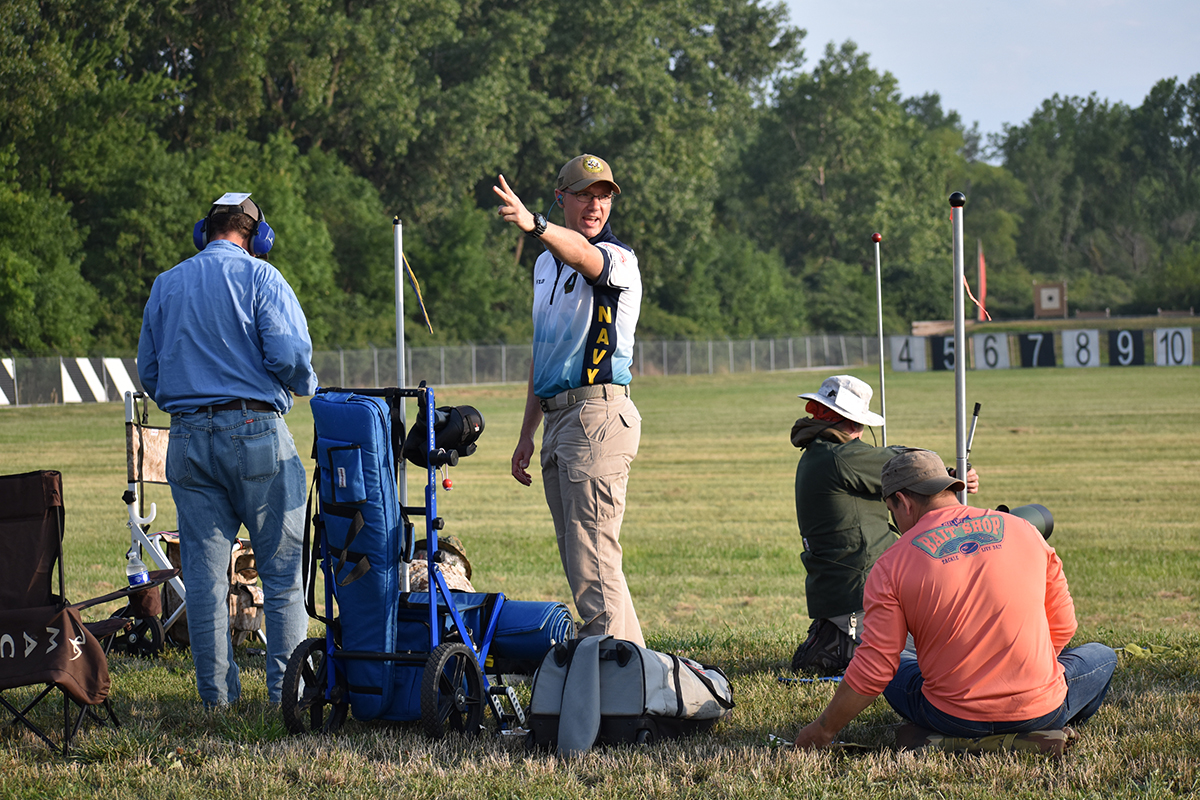 Competitors are paired up with experienced coaches during the Small Arms Firing School. Instruction is provided both in the classroom and on the range. 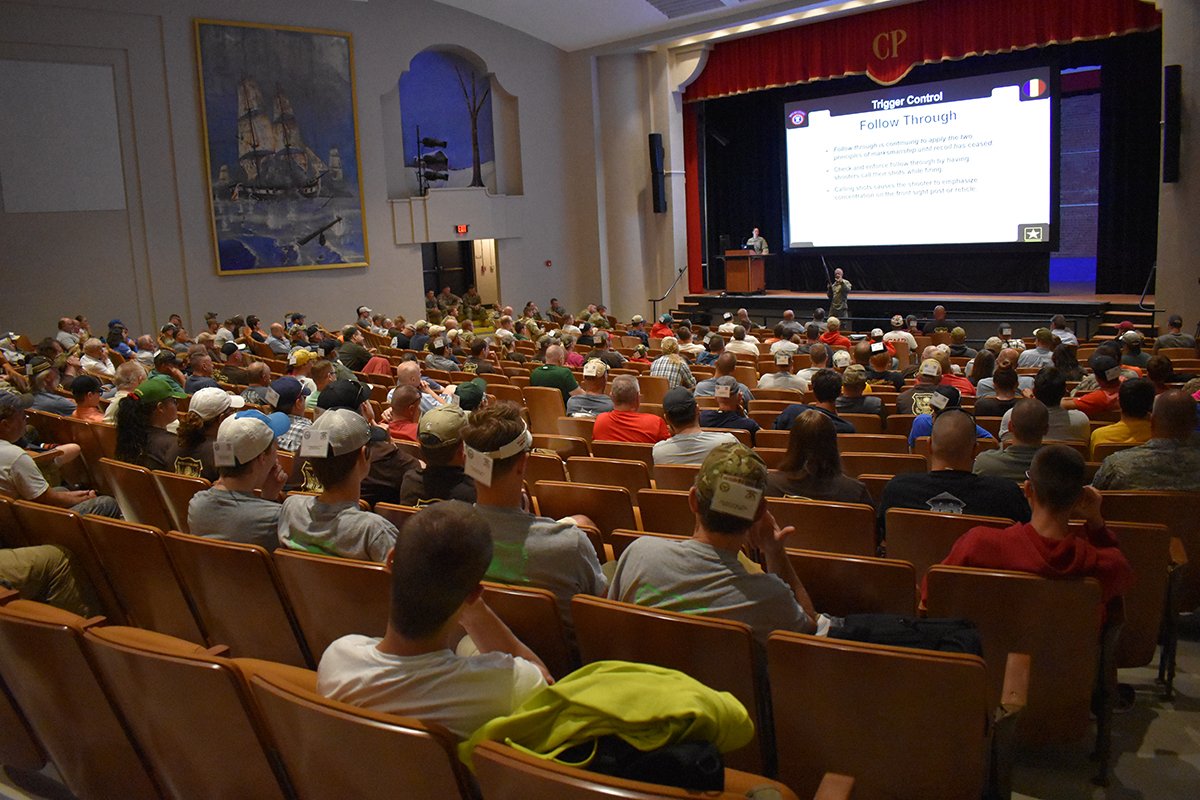 SAFS begins inside Hough Theatre with instruction from the United States Army Marksmanship Unit. The Advanced class takes place after where more in depth concepts are addressed.